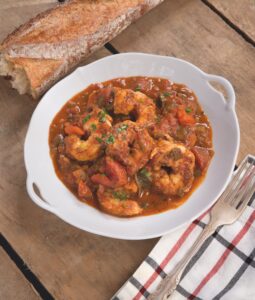 With a quart of Creole Mother Sauce in the refrigerator, a company-worthy dinner is only minutes away. Heat up the sauce while you cook the rice, toss a salad, and heat a loaf of bread. You can simply drop the shrimp into the simmering sauce, but the shrimp can be seasoned separately and then give them a quick sauté to add a little more caramelization.

Reheat the sauce base over medium heat, if necessary. Stir in the green onions, lower the heat a little, and continue cooking for 4 or 5 more minutes.

Season the peeled shrimp with Shrimp Magic. Heat oil in a large skillet on high. Then add the shrimp and sauté for a few seconds on each side, and ladle the sauce into the pan. Bring the mixture to a boil, turn the heat off, and set aside.

To serve, put a big scoop of rice in the center of a large warmed soup bowl. Ladle about 1 cup of the Shrimp Creole over the rice and sprinkle with chopped parsley.

To make the roux, heat the oil on high in a large, heavy-bottom pot. Whisk the flour into the hot oil and continue to whisk constantly. Use a large spoon to scrape the corners of the skillet the whisk won’t reach so that it cooks evenly.

When the color is approaching that of dark brown sugar, which should be 2 or 3 minutes, remove the pan from the heat and stir in the bell pepper, onion, celery, okra, garlic, and bay leaf. The roux color will advance one shade. Cover and cook on very low heat for 15 minutes.

Add the tomatoes with juice, mashing them up with your hands into small pieces, and then add the stock. Scrape the bottom of the pan with a ladle or spoon to release any crusted bits. Season with the Shrimp Magic and salt.

Bring this to a simmer and cook on low boil for about an hour to reduce by about 40 percent. Skim off the fat by tilting the pan and allowing the grease to collect along the sides so it can easily be removed with a large spoon. Remove the bay leaf.

This can be made several days in advance and refrigerated, or several months ahead and frozen.