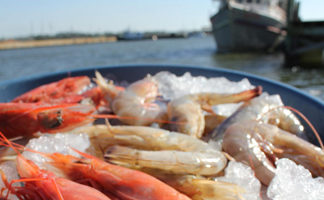 Oh, the taste of wild-caught shrimp!

What makes wild-caught shrimp taste so good? Plain and simple, it’s all about the nutrient-rich waters of the Gulf of Mexico and South Atlantic Ocean. There’s just really nothing like them. The pristine waters of the Gulf and South Atlantic are embedded with a unique flavor profile that is absorbed into shrimp to provide an unmistakable, robust taste. Consider these waters like ginormous salinity pools of natural seasoning — 615,000 square miles teeming with succulent shrimp that are clean and sweet all because they are pulled from a natural environment free from harsh chemicals. Also, wild shrimp feast on a wild diet, which only enhances the taste and provides a high-quality product that is truly matchless in flavor. Of course, once chefs get their hands on the backyard blessing, shrimp are taken to another level and transformed into an array of delicious dishes. Whether they are paired with a touch of this, a dash of that, or a toss in a savory sauce, wild-caught shrimp are in a culinary league of their own. 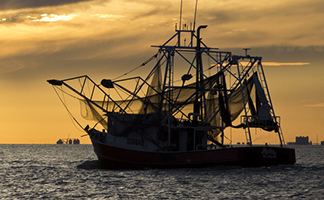 The design of a shrimp boat is intricate. From the outriggers that are lowered on each side to the specialty-crafted gear that holds the nets open underwater, all play a vital role in the success of a good day on the water. However, the most critical element to any shrimp boat is the trawl nets used to bring in fresh catch daily. The construction of these nets is unique because not only does it perfectly glide across the floor bed of the ocean to catch wild shrimp, it’s also designed to protect other marine life that share the same environment. As part of federal regulation, all U.S. shrimpers are required to use trawl nets equipped with a TED — Turtle Excluder Device — that safely guides sea turtles through an escape flap. This ingenious mechanism has proven to be 97 percent effective at excluding sea turtles of all sizes. To protect other marine life like red snapper or any finfish, a BRD — Bycatch Reduction Device — also is installed to provide a small opening at the top of the net for fish to escape. No doubt wild-caught shrimp are the best, but it’s all about shrimping environmentally smart!

Want to learn more about how a shrimp boat operates? Check out this video. 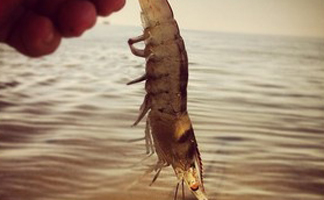 Wild-caught shrimp so good and so healthy

It’s a well-known fact that shrimp ranks No. 1 as the most popular seafood in the world, and for good reason. Not only are wild-caught shrimp laced with palatable flavor as a result of its natural habitat, but also the nutritional value and health benefits of these tasty crustaceans are impressive. In fact, it’s pretty much a dieter’s dream food — amazing taste packed with the perfect nutrient-rich combination for one’s well being. Shrimp are low in fat, low in calories, have zero carbohydrates, and are significantly high in protein. For example, 4 ounces of boiled or steamed shrimp contains 112 calories, offers nearly 24 grams of protein, and only has 1.2 grams of fat. And no worries about cholesterol either! Research has shown the “good fats” (omega-3 fats) in shrimp reduces cholesterol impact. In addition, the anti-inflammatory and antioxidant support is wonderful for the body thanks to two unique antioxidants: astaxanthin, which is the color pigment in shrimp responsible for the red and orange colors, and the mineral, selenium. Other nutritional elements in shrimp include Vitamin D, B12, B3, iron and zinc. So, eat up and enjoy! There really is nothing like the hearty flavor and healthy composition of wild-caught shrimp.

(When to buy what kind of shrimp)

Results provided by the National Oceanic and Atmospheric Administration. Based on data from 2002 to 2012.