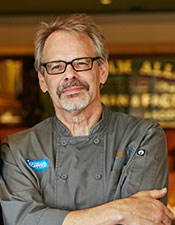 During the past sixteen years of co-owning legendary New Orleans fine dining seafood restaurant GW Fins with co-owner Gary Wollerman, Chef/Owner Tenney Flynn has become known as one of the country’s foremost seafood experts, as well as a vocal enthusiast for the bounty of seafood that is available in the Gulf.

Chef Flynn is known throughout the region for his stringent seafood approval process for GW Fins, and is, as the Wall Street Journal has referred to him “widely acknowledged as the fishmonger czar of the Gulf region.”

”One of my favorite aspects of our restaurant is that we print out menu daily, so we don’t have to have any specific item on the menu. That way we don’t have to accept any seafood that isn’t pristine,” states Chef Flynn.

With the majority of GW Fins’ menu changing nightly, each evening is an entirely unique dining experience. Although there are perennial favorites on GW Fins’ menu such as Lobster Dumplings, Crab Potstickers with Pea Shoot Butter and Sizzling Smoked Oysters, the majority of menu items have evolved since the restaurant opened. Chef Flynn’s creativity has been instrumental in expanding the menu at GW Fins. Many of the dishes draw from his love of both local New Orleans cuisine as well as Asian influences.

“My culinary philosophy is that if you are working with seafood that already has wonderful flavor, the cooking techniques should respect these natural flavors rather than overwhelm them,” states Flynn.

Growing up cooking in his father’s restaurant in Stone Mountain, Georgia, Flynn developed an innate understanding of Southern food and culinary traditions. From there he received his formal training at the Culinary Institute of America at Hyde Park. Chef Flynn officially began his fine dining career with Atlanta’s esteemed Buckhead Life Group, cooking at such famed restaurants as Pano’s and Paul’s, Fishmarket at Lenox and finally as Executive Chef of Chops. Ruth’s Chris Steak House then recruited his talents as the company’s Director of Culinary Operations, a position he held for seven years.

Since launching GW Fins in 2001, Chef Flynn has developed a reputation as one of the most knowledgeable and discriminating seafood chefs in the country. Chef Flynn is a master of his craft, but one who is completely unassuming. That is, until you ask him about seafood. Then his wealth of knowledge and passion about seafood is unmistakable. A seafood icon, asked to judge national seafood competitions and provide cooking demonstrations for fellow chefs and consumers, Chef Flynn has become a national celebrity for his weekly cooking segments on the syndicated fishing show, “The Big Fish.” In fact, often guests come to New Orleans to dine at GW Fins after watching him prepare a variety of dishes on this popular show.

For the second time in the past 13 years, GW Fins’ Executive Chef and Co-Owner, Tenney Flynn has been named “New Orleans Magazine’s Chef of Year,” both in 2004 and then again in 2011.

GW Fins is open for dinner nightly and is located in New Orleans at 808 Bienville Street (504.581.3467). Please visit their website at gwfins.com for additional information.

Chef Tenney released a cookbook in June of 2019.