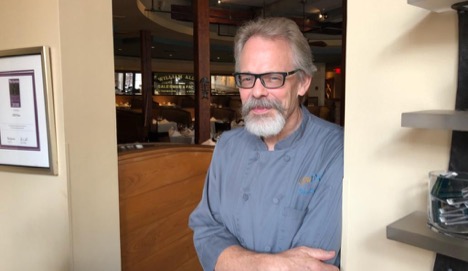 Chef Flynn has been working on the book for over two years, and now both clamoring New Orleanians and seafood fans across the country finally have a chance to take a page from one of Louisiana’s most acclaimed chefs.

According to an interview with nola.com, Flynn wanted to write a cookbook that was more accessible to the average at-home chef.

“‘We hear people say, I don’t like fish, but I like your fish,’ Flynn said. ‘This is the easiest protein in the world to cook. It requires very short cook times and there’s no reason for people to be afraid of it.'”

The cookbook is easy to follow, with clearly laid out, step-by-step instructions, plenty of photos, and helpful tips to ensure that blossoming chefs are getting entrees done right more often. It features several fan-favorites from Flynn’s popular New Orleans-based restaurant GW Fins, including gumbo, lobster dumplings, and parmesan-crusted flounder.

Tenney Flynn is an award-winning chef based out of New Orleans, LA, where he is both the head chef and co-owner of GW Fins, one of the city’s premier seafood restaurants, along with being one of both the most and highest-reviewed New Orleans restaurants on TripAdvisor. Described by the Wall Street Journal as “the fishmonger czar of the Gulf Region,” Flynn is well-known across the country as “one of the most knowledgeable and discriminating seafood chefs in the country,” particularly evident in his incredibly strict approval process for any and all seafood served in his restaurant. This is why Flynn only cooks with American wild-caught Gulf of Mexico shrimp from Wild American Shrimp.

Chef Flynn’s new cookbook can be purchased on Amazon.

‘The Deep End of Flavor: Recipes and Stories from New Orleans’ Premier Seafood Chef’ is by Chef Tenney Flynn, with Susan Puckett.