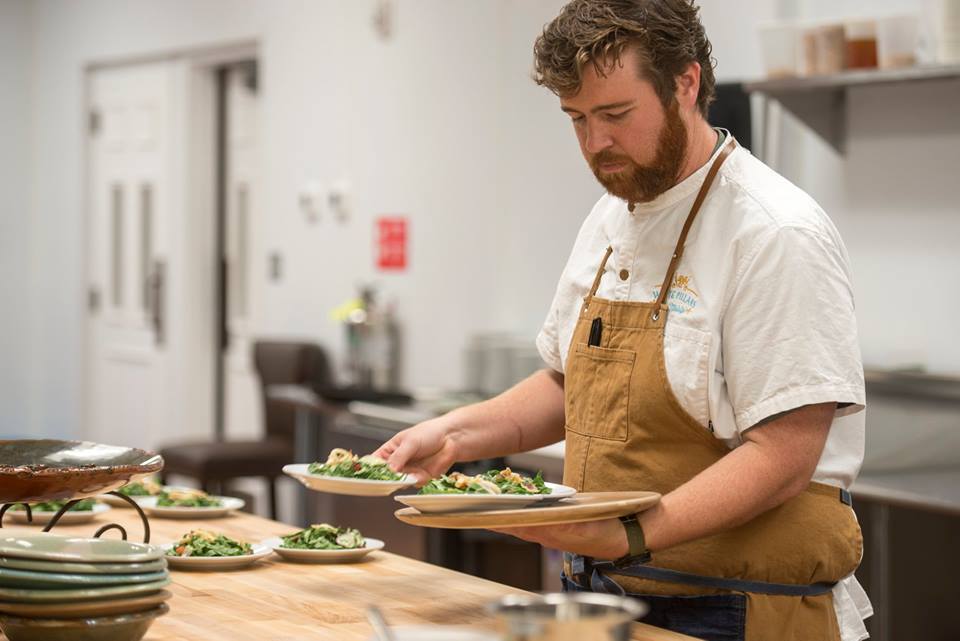 Austin Sumrall, the chef-owner of White Pillars has been working in restaurants for many years and has had a passion for cooking most of his life. Austin grew up in McComb, Mississippi, and went on to graduate from the University of Mississippi with a degree in Hotel and Restaurant Management. He received classical training at the Culinary Institute of America in Hyde Park, New York, and has worked for three different James Beard award winners with the title of “Best Chef: South.” In 2021, Austin was crowned the winner of the 2021 Great American Seafood Cook-Off.

Austin met his wife, Gulfport native, Tresse Young while in school at Ole Miss. While Austin was in culinary school in New York, Tresse was across the country studying to become a nurse at the University of Southern Mississippi in Hattiesburg. Soon after their respective graduations, the couple married in October 2012, and moved to Birmingham, Alabama, for Austin to begin his career at the famed Hot and Hot Fish Club under Chef Chris Hastings. Not long after, they welcomed son Ollie to the family in 2015, and the Sumralls began making plans to move back home to Mississippi and pursue their dream of opening their very own restaurant.

The main reason Chef Austin chooses Wild American Shrimp (besides the fact that they are the best tasting) is that he wants to support his local economy. On the MS gulf coast, he feels blessed to have some of the best shrimp and the best shrimpers right here at his front door. He says, “As a chef, there is not much more excitement than watching shrimp boats right off the front porch of my restaurant and knowing that I can drive five minutes down the road and buy those shrimp.”

When they’re not at White Pillars, the Sumralls spend nearly every Saturday morning at the local farmers’ markets gathering produce and thinking about how they could best prepare it for dinner that night. Even in his free time, Austin lives, breathes, and thinks about food. He loves to cook dinner for his family, and Tresse has no problem doling out critiques. They end almost every meal with.. “but was that good enough for the menu?” Even growing up, Austin and his family always joke that they would sit at the table for one meal and be planning the next.