Child labor, forced labor and child forced labor are used in at least four countries that supply imported shrimp to the U.S., according to an app created by the U.S. Department of Labor.

The U.S. Department of Labor’s app “Sweat & Toil: Child Labor, Forced Labor, and Human Trafficking Around the World” provides a comprehensive resource for finding what goods are produced with child labor or forced labor in various countries around the world.

In addition to shrimp, other goods include citrus fruits, textiles, gems and electronics. 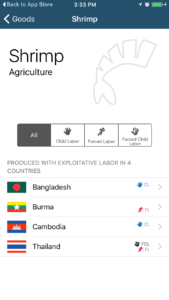 The International Labor Organization’s Convention 29 defines forced labor as “all work or service exacted from any person under the menace of any penalty and for which the said person has not offered himself voluntarily,” according to the Department of Labor’s website.

Using 2016 statistics, the ILO has estimated there are 152 million children who are 5 to 17 years old in child labor. Of that number, about 73 million are in hazardous conditions. The ILO estimates 25 million people are trapped in forced labor, including more than 4 million children.

The Sweat & Toil app is free and available for both iPhone and Android. Links for downloading the app can be found on this page of the DOL website.

Wild American Shrimp are produced completely in the United States. They are fished from the nutrient-rich waters of the Gulf of Mexico and the South Atlantic, and are naturally hormone- and antibiotic-free. They are processed by companies who process under the labor laws of the United States.