Fresh: Refrigerate shrimp in cling wrap or airtight containers in the coldest part of the refrigerator. Keep your refrigerator at 32 to 38 degrees F. For best flavor and quality, use fresh shrimp within one to two days. Cooked shrimp can be refrigerated 3 to 4 days.

Frozen: Place frozen shrimp in home freezer immediately after purchase until ready to use. Keep freezer at 0 degrees F or below.

If purchasing raw shrimp for freezing, twist off the heads. Place headless, shell-on shrimp in freezer bags with ice water. Expel air and seal bags. Spread bas out in freezer for quick freezing. Shrimp maintain their quality for twelve months.

Deveining the shrimp is a matter of taste. Some people choose to remove the black “vein” that runs along the back of the shrimp. These veins are in fact edible but can sometimes taste gritty, particularly with larger shrimp. While it isn’t necessary to remove the vein, some people say the shrimp look and taste better when deveined.

How-To: Peel and Devein a Shrimp

Even though they have plenty of tiny legs to trip you up, peeling a shrimp only takes a few seconds.

Running water, paper towels, a regular knife and a pair of hands. 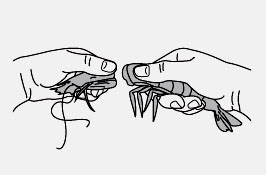 First thing’s first—you’ll need to remove the head before cooking. Simply hold on to the body of the shrimp with one hand, and with the thumb and forefinger of your other hand, twist the head and pull it right off. Take a paper towel and wipe away any of the mess that’s left before rinsing off the shrimp. 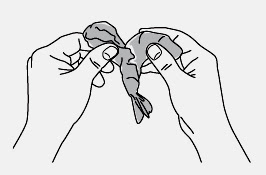 Now take your shrimp (cooked or raw), grab the tail with one hand and pull the legs and shell off with the thumb and forefinger of your other hand. The whole package should slide off in one piece. 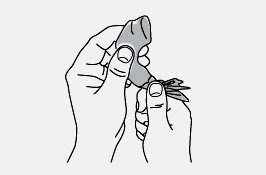 At this point, all you have left is the tail, which can be pulled off easily if you pinch it at the bottom and pull the shrimp from the top. Make sure you don’t leave the tail meat behind—it’s just as good as the rest. 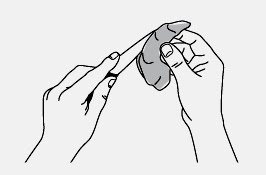 When you’ve gotten rid the shell, take a knife and make a small cut along the back of the shrimp. If you can see the vein, grab it and carefully pull it out; if you can’t see the vein, don’t worry with it.

One pound of head-on white shrimp will yield .649 pounds after deheading.

One pound of head-on brown shrimp will yield .621 pounds after deheading.

Whether you are boiling, blackening, sautéing, or grilling shrimp, the number one tip for cooking is NOT to overcook them. When overcooked, the shrimp’s texture and taste might resemble something like a pencil eraser, but when cooked right, Wild American Shrimp® is a succulent treat laced with one-of-a-kind flavor and the perfect addition to any meal.”

Tip #1: A good rule of thumb is to check the color — shrimp should be a healthy pink.

Tip #2: Remove your shrimp from the refrigerator about 20 minutes before you plan to cook them. Rinse them under cool water. Shake the excess water from the shrimp.

How to BOIL Shrimp 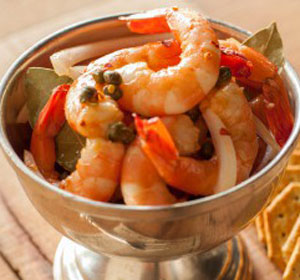 How to SAUTE Shrimp 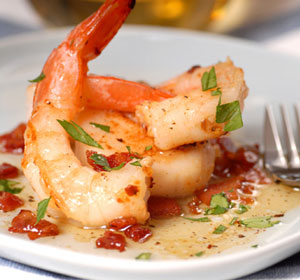 How to GRILL Shrimp 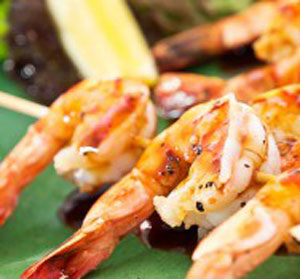 Turn the shrimp on its back, so that the side with the legs is exposed. On that side, near the top of the shrimp, place thumbs in the middle and pull the shell apart. The shrimp shell is very thin and will come off easily. Just pull apart the whole under side, from the legs to where the tail begins, and the shell will come off in one large piece. If serving the shrimp whole as an appetizer you can keep the tail intact, as it makes a convenient handle.