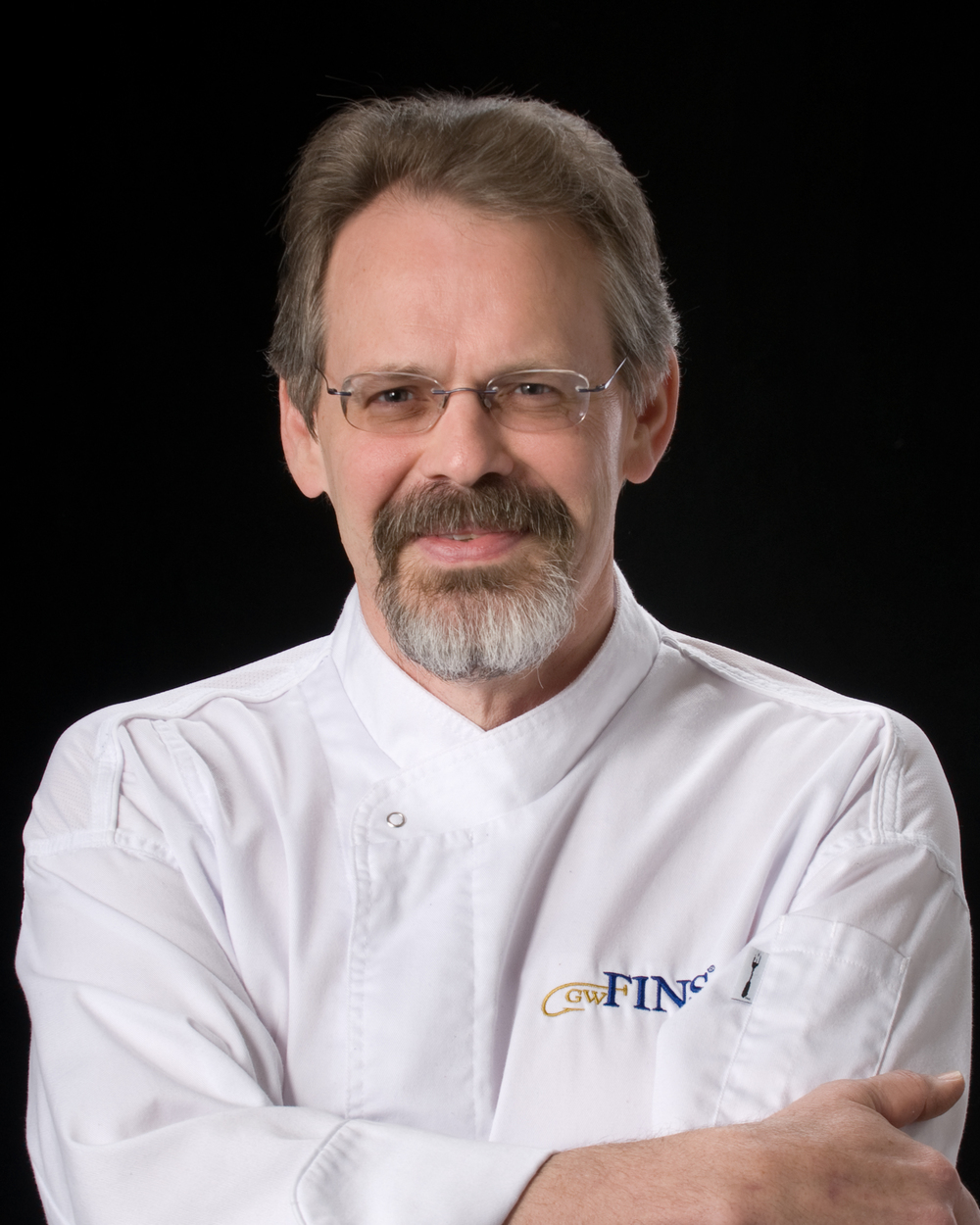 Chef Tenney Flynn, AKA the Fishmonger Czar of the Gulf Region is seriously fun, and scarily talented. He’s the co-owner of GW Fins and has won too many accolades to list. Most recently, TripAdvisor awarded GW Fins a spot on the Top 25 Best of US Restaurants list and they claim first place out of 1,488 New Orleans eateries.

Almost always in a dark chef coat, he stands with his hands on his elbows, looking utterly cool in his black-rimmed glasses and barely-there smile. He exudes competence and you can tell that if you handed him a tin of anchovies, some bok choy, and a box of funfetti cake mix, he’d cook something delicious, chuckling the whole time.

I recently got a chance to talk with Chef Tenney and get answers to a few burning questions I had.

JM: How long have you been cooking?

Tenney Flynn: Boy, that’s tough. It’s been well over 50 years, I’d say. I started working in my dad’s restaurant when I was seven. It was a family style place in the Atlanta area during the sixties and seventies. My dad put me in the back where no one could see me and I did a little of everything.

JM: Did you have a bolt out of the blue moment when you realized you wanted to be a professional chef?

TF: Actually, yes. When I was a teenager, my dad took me to the National Restaurant Association show in Chicago. They have some really elaborate stuff there, like cold buffet work and chocolate sculptures. It’s the kind of food that’s great to look at, not necessarily eat, but it really caught my eye and stuck with me. I got sidetracked in the nightclub business, though. I spent about eight years running a rock ’n roll club during the time when the legal drinking age was 18 and beers cost a buck. But eventually I got really sick of the bar business, so I sold it, made some money, and applied to the CIA. [Ed.: please note the CIA is NOT the Central Intelligence Agency, though Chef Tenney would be a great sleeper agent; it’s the Culinary Institute of America]

JM: I’ve heard that most seafood is consumed in restaurants because people are nervous to cook it themselves. What would you tell people who aren’t too keen to prepare seafood at home?

TF: Number one, make friends with your fishmonger. Think of it like this—you have a car, and you learn to treasure a good mechanic. You’re not going to fix your car, your mechanic is, so do the same thing with your fishmonger. Establish yourself as a savvy consumer and give them feedback. If you really loved something, tell them, and vice versa.

Also, don’t fall in love with a recipe in a book. Go to the market, talk to your fishmonger buddy, get their recommendation, and buy domestic seafood wherever it’s from, Hawaii, the Gulf, wherever, as long as it’s domestic. Then adjust your recipe to whatever’s the freshest thing in the case.

I always tell people that in order to make a fish fillet, it takes about the same skill level and time as it does to fry an egg. If you can fry an egg, you can make a great fillet. It’s the easiest protein in the world to cook.

One big thing is you should have the rest of the meal ready to go so the fish is the last thing you put in the pan. Go from the pan to the serving plate to the table. You want people to be saying that fish is too hot to eat. The different between delicious fish and dry, tasteless fish is only a couple minutes.

But the biggest part of the equation is having good fish to cook, and that’s why you need your fishmonger. Go to your grocery store and make friends.

Shrimp freezes a lot better than most other kinds of seafood, so if you can’t get something fresh, frozen shrimp is a very good option. You need to look for the country of origin and whether or not it’s farm raised. They might try and disguise it a little, but look at the label.

TF: Louisiana seafood, hands down. Where I am in New Orleans, the Gulf is less than two hours away, we have shrimp all around us, blue crab all around, all the time. A lot of people don’t know that 66 percent of all finfish varieties come out of the Gulf of Mexico. I can buy a whole fish and get some really exciting stuff, not just snapper or tuna. The best is when I can get something from a scuba diver who’s just gone spearfishing. I actually do some of my own spearfishing too, sometimes for lionfish. [Ed.: lionfish is an invasive species that’s taking over the Atlantic and wrecking havoc on marine ecosystems. There are many ongoing eradication programs and lionfish is actually quite delicious]

JM: Would you rather fight a hundred shrimp-sized sharks, or one shark-sized shrimp?

TF: I love this question. Definitely the shark-sized shrimp because I bet it wouldn’t be a plankton eater and it wouldn’t be too hard to catch. I’d make shrimp everything. Fillets. Shrimp steaks. Shrimp ceviche. Shrimp vest. Shrimp hat.

JM: *laughing* That’s the best. Thank you so much for talking the time to talk to me!

And there you have it, ladies and gents. To recap, don’t get distracted by the club scene, make friends with your fishmonger, if you can fry an egg you can make delicious seafood at home, frozen domestic shrimp is always a good choice, and if you catch a 150-pound shrimp, you’ll probably have enough left over for a shrimp hat and vest.