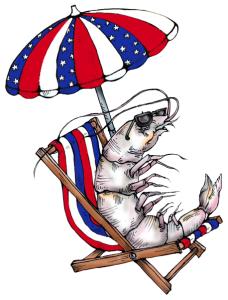 Since 1955, Smith & Sons Seafood in Darien, Georgia, has operated as a successful processor gleaning from abundant shrimp harvests pulled from South Atlantic waters. Walter “Big John” Smith Jr., vice president, 43, is the youngest of the sons and is now at the helm of the company that was started by his father, Walter “WM” Smith Sr. The patriarch of the business has passed away, but not a day goes by that John doesn’t think about the legacy his father left behind, especially with his picture hanging on the wall right across from his desk.

“He was just an impressive man, and I admired his work ethic and drive,” John says. “To this day, everywhere I go, my daddy’s friends will tell me stories about him like when he was drafted right out of high school to play baseball for the Pittsburgh Pirates. He chose not to do it. He chose to stay with his family. He chose to stay in the shrimp business.”

WM was quite the entrepreneur from a young age, and his strong work ethic pushed him to cultivate new business opportunities within the shrimp industry. The vision for the company goes back to when he was only 16-years-old, and he purchased a 32-foot boat to start catching live bait to sell to marinas, who in turn sold it to recreational fishermen. Every day, he would take his bait boat and drag a 20-foot net for shrimp, but when his catches were too heavy for him to pull in alone, large shrimp boats would come alongside him and help, but they were dumbfounded at the amount of shrimp he was pulling.

“There were some days he would pull in 1,200 to 1,500 pounds of shrimp,” John says. “One day he was asked how in the world he caught so much more bait shrimp than anybody else? You run the creeks and the banks and wherever you put out, there’s shrimp. My daddy said, ‘I always watch the marsh hen on the banks; whatever side he’s on, that’s where the shrimp are because he’s feeding on them.’ And that was his secret.”

He started developing relationships with the shrimpers, and this led to his next venture of buying shrimp from docks all along the East Coast, and then selling them to various customers. Although he continued to fish for live bait, he and a friend grew the brokering aspect of the business, which eventually paid off when Red Lobster became their first major client.

By the early 70s, WM had gained enough industry knowledge and was ready for his next step: “As the brokering business grew, and daddy started picking up more and more contracts. He started moving more in the direction of being on his own,” John says. “That’s when he put a name on the company, Smith & Sons Seafood, in the latter part of the 70s.”

John faithfully worked by his dad’s side. His older brother and only other sibling, Thomas, also worked for the company, but is no longer active. Their mom, Jean, played a vital role in the growth of the company by helping with necessary admin work, and especially with her creative marketing ideas to help promote their product. Today, Jean, 67, operates as president, is 100 percent owner, and although John runs the business, her knack for clever ideas hasn’t stopped.

From the beginning, the family business was on a steady path toward success with clients that ranged from restaurants and food service companies on the East Coast to selling shrimp to processors in the Gulf region when Smith & Sons supply was more than they could handle themselves.

At age 16, John’s first role in the company was driving a delivery truck, but by age 20, his dad had taught him all he needed to know to run a prosperous business: “I stayed with my father every day, went to bank meetings with him, went to the docks with him, and had my own little checkbook where I could purchase shrimp,” John says. “He showed me what to look for in quality shrimp, and taught me how to buy and how to sell.”

Shortly after, his father was diagnosed with bone cancer, and John knew he needed to step in and help move the family business forward. During a time of uncertainty, all John had to hold onto was the knowledge gained from his mentor, and his strong faith. At 20-years-old, he remembers looking at the overwhelming figure of $17,300 it cost a month to run the business. John took a deep breath and said, “God, if anyone knows the shrimp business, you do. You’re all I have, and I need some help. I put this business in your hands.”

John also credits the success to processors that had great respect for his father personally and as a reputable businessman. After WM passed away, many processors in the South Atlantic and Gulf areas continued to buy fresh shrimp from Smith & Sons. Even today, the exchange of grace through lines of credit with fellow processors still stands because it’s the way his father did business with friends in the industry.

“My daddy always told me, ‘Your name is all you have,’” John says. “That’s what this whole industry is built on: trust and loyalty. So as daddy started buying up and down the coast and started developing relationships, now I’m starting to deal with their kids.”

Up until the early 90s, Smith & Sons focused only on buying and selling to plants. The processing aspect of the business started after John got a little motherly wisdom nudge from Jean, who came up with the idea to process and pack their own product. In 1994, they bought the plant that is now their current 20,000-square-foot facility.

The loss of WM had a tremendous impact on the very close-knit family and in the shrimping community, but even after his death, his longstanding reputation of integrity helped John secure his first major contract with a large chain of East Coast grocery stores. To this day, Harris Teeter Supermarkets, Inc. (recently purchased by Kroger) is Smith & Sons largest customer for IQF wild domestic shrimp.

Before long, contract after contract started rolling in, and when shrimp season was over, national retail clients began requesting products like catfish nuggets and other seafood in custom packs for their businesses. Processing 10 million pounds of product a year was not uncommon.

In a short time, Smith & Sons has grown to become one of the largest processors to not only offer IQF shrimp, but now also to offer packed fresh shrimp to an extensive list of regional and national grocery stores, which is their primary customer: “We are the largest packer on the East Coast of domestic fresh product,” John says. “We specialize in knowing how to handle a quality pack for grocery stores.” The list of clients Smith & Sons has acquired just in the last few years is phenomenal — a snowball effect of grand success that spans the nation.

With an early company goal of adding one grocery store to the client list per year, John understands the networking required behind that kind of vision is time-consuming with current and potential customers, but it doesn’t bother him at all. This man was born to network: “My key thing is on the phone,” he says. “I do more on my cell phone now than I really do in the office. Usually, from 5:30 to 6 o’clock in the morning until about 10 o’clock at night, I’ve had 75 to 100 phone calls a day, and I can’t even tell you how many emails I get.”

Since custom packing for a wide base of grocery store chains has become the significant pillar of the business, marketing a Smith & Sons product has only come into fruition in the last couple years. John says he wants to “work smarter, not harder” and he knows establishing a brand takes time, but, so far, so good.

Future plans include incorporating the company’s new logo in all Smith & Sons marketing efforts with the tagline “Home of the Freshie.” Freshie is their mascot — an iconic shrimp figure sporting a pair of sunglasses while chilling in a chair under a beach umbrella. Plans down the road also include building the label by adding items such as a shrimp boil pack, seasonings, batter, etc.

In addition to offering customers fresh and frozen shrimp (headless, head on, peeled and deveined), the business also packs crab legs and miscellaneous fish items. However, shrimp will always be the primary staple with 1-, 2- and 5-pound IQF retail bags (no block frozen).

John says state-of-the-art equipment and technology are all part of the package, but one particular service many of his customers demand is the guarantee of traceability: “Traceability is a must,” he says. “It’s important because people want to know where there product is coming from. Customers need that awareness and assurance that our product is the real deal and not a farm-raised product or an imported product.”