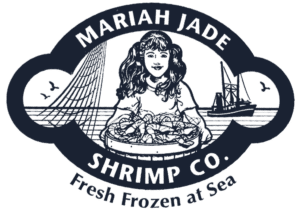 David and Kim Chauvin are big visionaries. They currently own three businesses in Dulac, Louisiana: David Chauvin Seafood Company, a fuel/ice dock, supply house, retail location and give you a 1.5-hour tour of the facilities where you take a deeper look into the domestic shrimp industry; Bluewater, an IQF processing plant; and Mariah Jade, a dock and specialty processing plant for hand-peeled shrimp. They also own another dock in the Chauvin area called David Chauvin’s Seafood Company of Cocodrie and another supply company called Huey Ice Company in Dulac.

The core of their success is a longstanding foundation of faith that encourages them to keep moving forward in an industry that experiences its fair share of ups and downs. Their steadfast focus is fueled by optimism to keep building bigger and better to ensure the Chauvins, a fifth-generation seafood family, continue strongly on a path of success for future generations.

The husband-and-wife team are partners in life and partners in business, and for the high school sweethearts who have been married for 34 years, a commitment of blood, sweat, and tears have richly paid off with an established operation and character reputation built on honesty, quality, and loyalty.

“My husband was a commercial fisherman for 17 years, so he has an advantage in that he knows all the fishermen around here,” Kim says while looking at the shrimp boats docked at the company that bears her husband’s name. “He has worked closely with them and they trust him. He understands what it means to be a fisherman, and that’s why a lot of them come here to do business.”

David’s background in the industry is laced with abundant generational blessings of seafood heritage. His great grandfather, grandfather, and father were all commercial fishermen, so it was natural for David to sail the same path.

Some of his best times as a child were spent on a boat watching his grandfather and father harvest the gulf for shrimp. Some of his best memories as a teenager were working alongside his skilled father to build a steel hull without a blueprint. Some of his best moments as a father have been carrying on the fishing tradition with his own family.

“Growing up in the industry is something I enjoyed so much,” David says. “I have such a respect for my father and I enjoyed the time we spent together. Two years prior to getting out of high school, he asked me if this was something I wanted to do for the rest of my life. When I said yes, he said, ‘Well, we need to build you a boat so that when you get out of school, you can support your family.’”

And so David became a fourth-generation fisherman, and years later, became a first-generation dock owner processor.

The main offices are located at David Chauvin Seafood Company, which opened in 2010 and the tour part of it called Down The Bayou Shrimp Tours began in 2016. Bluewater is located right down the road, and that venture started in 2013. As for Mariah Jade, that’s where the processing journey began for David and Kim, and their three children who all grew up on the water and are a vital part of the family operation: David Anthony, 30, boat captain; Dustin James, 29, plant manager and HVAC specialist; and Mariah Jade, 23, office manager. The couple’s godson, Chance, is a shipyard dock manager and is also a part of the team.

The name Mariah Jade carries significant meaning for obvious reasons. Not only is it their specialty processing plant and dock perfectly situated in the couple’s backyard on the waters of Petit Caillou, but it also is the name of the family’s 73-foot trawler flagship vessel. When their daughter was born in 1996, David was wrapping up construction on the boat he specially designed to bring the whole family on his fishing trips, and it was only appropriate it be christened after their new little girl.

There were many years when David would be on the water more than 300 days out of the year, so having the family join him at times helped ease the distance and created priceless memories for the Chauvins. Dustin smiles as he fondly remembers the trips, especially the ones where holidays were spent on the gulf.

“My dad built that boat so we could have a lot of family time,” he says. “I can remember every single holiday, every Thanksgiving and Christmas, every single vacation we ever had was out on that boat. It was great.”

Since Dustin grew up on water and was carefully trained on all the intricate details of how a fishing vessel operates, he laughs at the times when his dad put him in a questionable situation when his friends joined him for trips:
“I remember whenever we had to do something that may have been a little dangerous, my friends would always jump up and want to help,” he says. “One time we had an outrigger that missed the fork and went all the way to the front of the boat, so somebody had to go up there and tie a rope on it. My friend jumped up and said, ‘I’ll do it!’ and my dad said, ‘No, no, no…that’s crazy. You can get hurt. Dustin, go up there and tie that rope.’ I was like, ‘What?’”

David and Kim’s path to processing was kick-started from a silver lining opportunity as a result of some hard times in 2000 when a flood of imported shrimp hit domestic shrimpers particularly hard. In a desperate effort to pull in more income, Kim was motivated to take their business to another level.

While David, his sons, neighbors, and friends tirelessly worked the family fleet nonstop, Kim developed relationships with buyers from multiple restaurants and sold fresh shrimp wherever she could find a place — from parking lots to roadside retail to grocery stores. Business boomed and they eventually built the Mariah Jade dock in their backyard to unload the vessels and distribute shrimp to customers and created their own Mariah Jade brand.

Their fortitude, charged by faith and sheer determination, propelled the Chauvins to conquer difficult industry obstacles, and in time, became a leading Louisiana processor. The demand for a quality product continues today with local, regional, and soon-to-be national customers that all consist of seafood retail shops, restaurants, and bait shops.

From the beginning to the end of shrimp season, it’s all hands on deck: “As soon as things get rolling, we will unload 12,000 pounds in an hour,” David says. “It’s not like you come in and work 40 to 50 hours a week. During the season, we put in 40 hours in the first two days.”

“We have some really good workers and they have been loyal to us,” Kim adds. “They are an awesome crew.”

When operating as a dock and processor, and dealing with multiple clients, sustainability and traceability are important factors to the Chauvins, whether it’s teaching fishermen about these issues, or doing what’s necessary to maintain a high measure of quality and consistency in their product. Kim says every effort is made to promote, develop, and adhere to standards that will “keep the mom and pop businesses of our industry sustainable.”

“One of our biggest strengths is that we began in this business as commercial fishermen and still own three vessels, understand what it takes to catch shrimp, and know what it takes to bring in top-quality shrimp to the dock for our customers,” Kim says. “We are proud of our shrimp and want consumers to know they came from us. Our shrimp are traceable to our boats, and can be traced further to the processor, restaurant, bait shop, or retail location where it is carried.”

David admits work is his hobby and shrimp are his life. It’s all he’s ever known and he’s proud to have followed the path of Chauvin fishermen who have gone before him. As far as he is concerned, one thing is for sure, it’s all about family. He says none of the success would be possible without the strength and support of his wife and three children: “My family is just so important to me,” David says. “We are so blessed to live the way we live, meaning, to be able to work with your family is just one of the greatest gifts I think a man could have.”