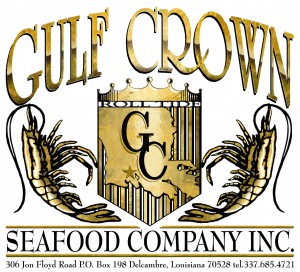 Gulf Crown Seafood Company Inc. has been in operation since 1987 when it opened in Delcambre, Louisiana, which is a city centrally located on the Gulf of Mexico, and is about a halfway point between the Texas and Florida coastlines.

Every morning, Jeff Floyd, president of the processing plant, drives down a special road to get to work. As he arrives at 306 Jon Floyd Road and walks up the steps to his office, an empty desk sits across from his and serves as bittersweet determination to keep the company moving forward with a standard of excellence just like his brother did.

Jon passed away 10 years ago, but not a day goes by that Jeff doesn’t think about the person who introduced him to the shrimp industry, and altered his career path for the better.

In 1987, Jon partnered with three brothers to open a small plant named Sims Brothers Seafood. After the brothers parted ways from the company in 1992, Jeff got a call from Jon who asked if he would be interested in partnering with him to take an adventure in the seafood industry, a line of work that Jeff knew nothing about.

Prone to embracing opportunities with an open mind, Jeff jumped on board for a new experience that required him to learn all aspects of the processing business. He may have been a partner, but he was on the front lines with entry-level employees to gain as much knowledge as possible, and although it was demanding and stretching, he enjoyed every minute of working in the strong family environment Jon had established in his company.

Jeff’s background in coal mining, construction and millwork greatly prepared him for the hands-on business he was stepping into, but he laughs when recalling how nothing prepared him for moving his family from Birmingham to Delcambre — big city life to a small Cajun town.

“That was a real shock,” he says. “The people here are good, and it was a blessing we ended up here, but the culture was a big difference.”

And then, of course, there was the Cajun-French language, the heavy accents, and the unique sayings from plant employees that also took some time getting used to: “Instead of saying, ‘Take the shrimp and put them in the cooler,’ they’d say, ‘You want me to save up the shrimp,’” which was then followed by Jeff shaking his head in confusion as he replied, “Do what?”

Another language lesson: “When going to the store with somebody, they’d say, ‘You want to get down,’ and that means get out of the truck, and lunch also means dinner,” he laughs. “Small things like that made me do a double take at the Cajun-French culture in the plant, but I think it’s great.”

After getting acclimated to the industry, Jeff became responsible for the daily operations of the plant while Jon handled all the buying. Together, the brothers steered the company on a path of steady growth, and in 1998, they changed the name to Gulf Crown.

Sadly, the company lost its founder in 2004, and it was up to Jeff to continue guiding the plant on a successful course for the loyal employees and a long list of customers Jon had worked tirelessly for over the years.

Jon is not one to be forgotten. His outgoing presence commanded attention, and his personality embraced every employee as a friend. Crystal Baez, office manager and 23-year employee, fondly remembers her boss who was like family to her: “He was easygoing, funny, giving, a prankster, a perfectionist, and when it was time to work, it was time to work,” she says. “He was married to the shrimp industry. It was his everything.”

Jon passed away on June 14, a time when the Louisiana shrimp season is in full swing. Jeff says not for one moment did he ever consider shutting down the plant: “I’m not a quitter, and I was even more determined to keep moving Gulf Crown forward to honor my brother and our loyal employees.”

The next day, Jeff gathered the company family in the break room, broke the news, and encouraged them to keep pressing while they got through the loss together. Anthony Broussard, supervisor of shipping and 25-year employee, recalls the ease of the transition despite the difficult time: “All the key people were in place, and by having all the people in position in every department, everyone knew their job, and it was really easy to keep doing your job,” he says. “It was hard not having Jon’s presence here, but it was easy for the company to move forward.”

Crystal has watched the company grow under Jeff’s direction in a way that Jon would be proud of, even though it’s a different approach: “Jon had the ‘if it ain’t broke, don’t fix it’ attitude, and Jeff is always looking for new and improved ways to automate,” she says. “Jon was more old school, and Jeff is more new school. He has done well and has brought more business in.”

Gulf Crown is now one of the largest shrimp processors in the country, and has become one of the largest SQF certified plants on the Gulf Coast. Since the plant started in 1987, it has doubled in size to a 40,000-square-foot operation that produces 135,000 pounds of finished product per day, which can be packed in 5-pound frozen blocks (Harbor Fresh label), or made available in 1, 2, 2.5, 3 and 5-pound IQF packs (Gulf Crown Seafood label).

Customers consist of restaurants, grocery stores and distributors located throughout the U.S., with a large emphasis directed along the East Coast, Florida, and in Chicago: “We know a lot of good restaurants in Chicago are serving Gulf Shrimp,” Jeff says.

Innovation and quality are the guiding principles for Gulf Crown. Jeff is very passionate about automation being a fundamental element to the present and future success of the business. On any given day, it’s not uncommon for a new piece of machinery to be tested that will help streamline the operation, cut overhead, and not sacrifice the quality of the product.

“When I first began, we started peeling at 4:30 in the morning, and the scales have evolved since then,” he says. “Before, a 5-pound bag would be up and down and may not be exact. We did 1,500 to 3,000 pounds an hour. When we moved to automatic scales, we can do 33 to 40 5-pound bags a minute, so that adds up to about 8,000 pounds an hour. It made a huge difference. That’s what automation has done and that’s where the industry is headed.”