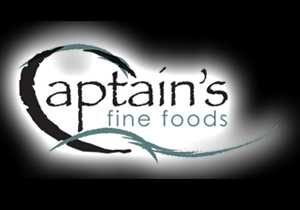 Captain’s Fine Foods was founded by businessman Mac Chen, who grew up in his family’s successful seafood business. He emigrated with his family to the United States from Taiwan in 1976 but didn’t like the climate in Chicago so he and his family, including young daughter Irene, moved South to Tampa, a city whose history is deeply rooted in the seafood business.

A natural innovator, Mac Chen saw that no one was selling mullet, which is plentiful in the Gulf, so he began shipping whole mullet to Taiwan, where the fish’s roe is prized.

“Mr. Chen was very instrumental in developing the domestic mullet roe business, which is huge, and it is a big part of our business today during the mullet roe season,” said David Gautier, vice president of operations.

This international venture along with his other business successes have earned Mac Chen respect throughout the seafood industry. Irene Chen, the managing partner in Captain’s Fine Foods, carries on the tradition with her hands-on involvement and dedication to growing the family business, which includes seafood trading, a U.S. tuna vessel fleet and foreign seafood processing plants.

When Mr. Chen added the Tampa company to his holdings, Captain’s Fine Foods was primarily a breading plant. He expanded the operation to include a domestic shrimp processing operation with the highest of standards.

“Mac is an innovator and he saw the opportunity to get into the domestic shrimp business like he did with the mullet.”

The company leadership headed by Mac Chen has decades of experience in the seafood industry. Said Gautier, “Irene is third generation, I’m third generation and between the three of us, we have more than 100 years in this business.”

In addition to the multigenerational company leadership, the employees at Captain’s Fine Seafoods form a supportive and productive group. “Everybody here works as a team, from Mac on down. Everybody is well respected, they love what they do and work together like a big family,” said Gautier.

After Chen moved his business from a rented facility in Tampa to the current location in an up-and-coming area in St. Petersburg, he invested in rebuilding and upgrading the property which houses the breading plant and domestic shrimp processing in separate but connected buildings.

The 60,000 square foot facility processes raw Key West Pink, domestic brown and white shrimp and fish, and has breading and par-frying capabilities. It also produces value-added items such as breaded and stuffed seafood and microwave-ready frozen seafood meals. The Wild American Shrimp are sustainably harvested from the Gulf of Mexico and the Atlantic Ocean.

In everything it does, the company strives for quality.
“We don’t cut corners and we strive to do chem free if possible,” Gautier said. “We want to give our customers quality, clean and wholesome products.”

The plant is inspected by the U.S. Department of Commerce and is Hazard Analysis & Critical Control Points compliant. It has been certified by NSF International to SQF Level 2 and also undergoes annual third party audits to ensure ongoing HACCP compliance.

Captain’s Fine Seafoods employs approximately 45 but the number increases during the mullet season, when temporary employees are brought in to process and pack the fish to ship to Taiwan, Italy, Spain and France.

The company support sustainability of Wild American Shrimp in a variety of efforts. Fishermen use turtle excluder devices and bycatch reduction devices to help avoid capturing large sea turtles and sharks and smaller fish and crabs. It also requires trip tickets showing where the seafood was caught to make sure all of Captain’s Fine Foods are fully traceable.

In everything the company does, quality is the goal. “We want to do the best job that can be done. It’s what we strive for here,” said Gautier. “As Mac says, ‘We do things the right way or we don’t do them at all.’”