How to Create Your Own Recipes with Chef Robert St. John 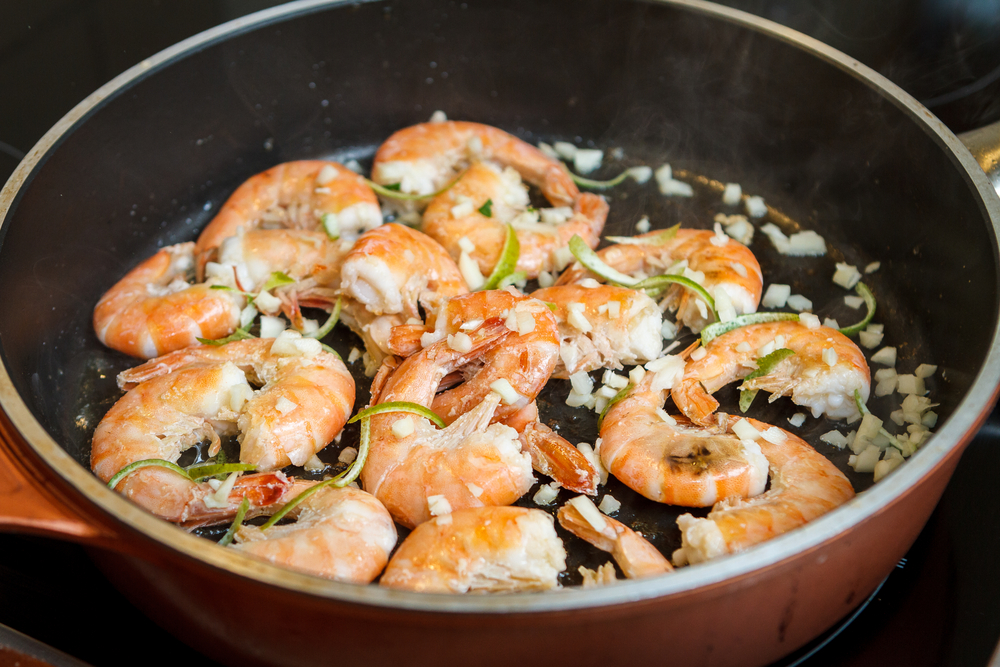 Robert St. John, a Wild American Shrimp Chef Advocate, writes a weekly column with topics ranging from traveling tips to cooking advice and recipes. Here is one of his columns on recipe development and how he created one of his most popular dishes.

Recipe inspiration comes from many places. Sometimes it’s a thought out of thin air. Many times inspiration comes while dining in another restaurant while traveling. Other times a recipe is developed because of a surplus of ingredients or a special price of a select item.

Though recipe development these days is much different than it was 30 years ago (and that’s a good thing). In the early days of our first restaurant, I was spending 90 hours a week in the kitchen. We fired our chef on opening night, and I knew nothing about working in a commercial kitchen. Over the next few years, I taught myself how to cook in a commercial kitchen. I also started developing recipes. Eventually, my recipes replaced the recipes of the opening chef.

The first recipe I ever created was a shrimp bisque recipe that we still use in the restaurant today. In actuality, it’s not really a bisque, it’s a chowder. But I didn’t know any better, and the chef I learned soup making from called it a bisque, so that’s what I called it. We still call it a bisque.

These days, I’m pulled in a couple of dozen directions on a daily basis. It’s been years since I worked a line shift in one of our kitchens. When we open up a new concept, I spend time working with the kitchen staff developing new dishes and helping with production, but they are all better than I ever was at pumping out food.

What I love is the conceptual and creative component of recipe development, and I am blessed to be surrounded by talented chefs with whom I can speak kitchen shorthand, “Let’s take those fresh shrimp that came in this afternoon, bread them in four parts cornflour and one part cornmeal, and toss them in the sweet chili-pepper sauce for chicken and put them inside those homemade four tortillas y’all made last week and dress them with julienned cabbage, those pickled onions from the tuna feature, a little bit of that spicy mayo from that nacho app, and some razor-thin sliced fresh jalapenos.” Thirty-two years as a restaurant owner have afforded me that creative privilege. It’s a nice place to be.

Mainly I am inspired when I travel. Nothing sparks my creativity more than being on the road and working away from home. I do my best thinking while I’m out of town and away from the restaurants.

Sometimes recipes are created out of necessity. Years ago, I tried my hand at gardening, and, instead of starting out small— with a couple of plants in pots— I did as I am prone to do and overdid it by planting a two-acre garden. I did this armed with zero knowledge of how to grow vegetables. If anyone at that time questioned whether I, as a neophyte gardener, had the knowledge to grow vegetables, it would have been clearly evident when they saw my four 100-foot rows of squash.

Within a matter of weeks, I was inundated with squash. It produced as fast as I could pick it. Our restaurant was covered up in squash. Every spare cooler shelf and corner of the pantry had squash stacked as high as we could get it.

This was over 20 years ago and I was hitting my stride in recipe development. Faced with the dilemma of a squash surplus, I remembered a baked squash dish my mother had served a few years earlier. I asked her where she got the recipe and then used that as a base recipe to create one of my favorite— and most popular— dishes: baked shrimp and squash.

I am not a particularly big fan of squash, though I love my baked shrimp and squash. To me, it is the perfect example of Piney Woods cuisine. It incorporates fresh shrimp from the Gulf of Mexico, Creole flavor profiles from Louisiana, and squash from the gardens of South Mississippi.

It is the most frequently prepared recipe in my first cookbook, and I have demoed it in presentations from New York to Texas, and hundreds of points in between. Every September we offer a special shrimp-themed menu in Crescent City Grill, and the baked shrimp and squash recipe is always one of the most popular offerings. We’re serving it now, and it’s flying out of the kitchen.

Often during the summer months, I’ll get fresh vegetables from the farmer’s market and prepare an all-vegetable lunch with the only protein being my baked shrimp and squash recipe. The key to picking squash is to keep it small. The larger the squash, the more water it contains. Choose small squash and drain it well after cooking it in a saute pan before adding it to the casserole. Most importantly, never plant 400 linear feet of squash unless you have nothing else to do but pick squash all summer.

You can find more information on Robert St. John and all of our Chef Advocates here. All of Robert St. John’s columns can also be found on his website. Visit the Buy Our Shrimp page to purchase wild-caught American shrimp for yourself or wholesale!