How to Serve Up Shrimp to Your Lil’ Shrimp!

On Facebook, Angela Portier shared a picture of her adorable son Henry Luke enjoying some delicious wild-caught American shrimp! Thanks, Angela! The wildest part about it: Henry Luke is only 9 months old! 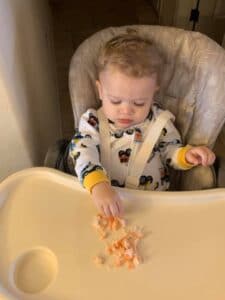 Of course, at Wild American Shrimp we believe in starting as early as possible when it comes to eating wild-caught shrimp, but you may be asking yourself: can a baby even eat shrimp?

According to Verywell Family, the American Academy of Pediatrics used to recommend that parents wait until their children were older before they started giving them fish or shellfish of any kind. However, they have recently shifted away from this stance, saying, “Within a few months of starting solid foods, your baby’s daily diet should include a variety of foods each day that may include…fish.” Despite this, they do personally recommend that,

“When introducing fish [or shrimp], make sure that it’s fully cooked. Mince it very finely and blend it in finely with vegetables that have already been introduced without problems. Always check fish and shellfish for bones and bits of shell.”

All of this is, of course, to reduce any risk of choking. Other than that, your baby should be fine eating seafood. In fact, one study from the Archives of Disease in Childhood found that babies that start eating fish and shellfish before they are 9 months old have a lower risk of getting eczema, and in other cultures around the world, fish is more of a centerpiece in babies’ diets than meats more common in ours, such as chicken, pork, and beef. For shellfish to feed your baby that are not high in mercury levels, the Food & Drug Administration recommends shrimp, and we of course recommend wild-caught American shrimp for the best taste, high nutritional value, and no harmful chemicals or antibiotics.

BabyCenter says that you can feed your children shellfish as early as 4 to 6 months old. However, all health resources, such as the American Academy of Pediatrics (AAP), say to be absolutely certain that your baby does not have any kind of food allergy or chronic eczema, as shrimp could potentially trigger an allergic reaction.

If your baby is in the clear for allergies, then we say feel free – and even encourage you – to make wild-caught American shrimp a staple of your baby’s diet as soon as possible! Try serving it in a light gumbo, mix it in with mashed avocado, or serve it with rice! While our Recipes page is typically more designed for traditional meals, feel free to tweak our recipes in ways that would suit your baby’s tastes! And of course, we always recommend you use Wild American Shrimp, easily located in your nearby markets and grocery stores, just look for the words, “wild-caught American shrimp” on the packaging.

* Disclaimer: Always be sure to discuss with your pediatrician before introducing new foods to your infant.