How Railroads and Ice Revolutionized the Shrimp Industry 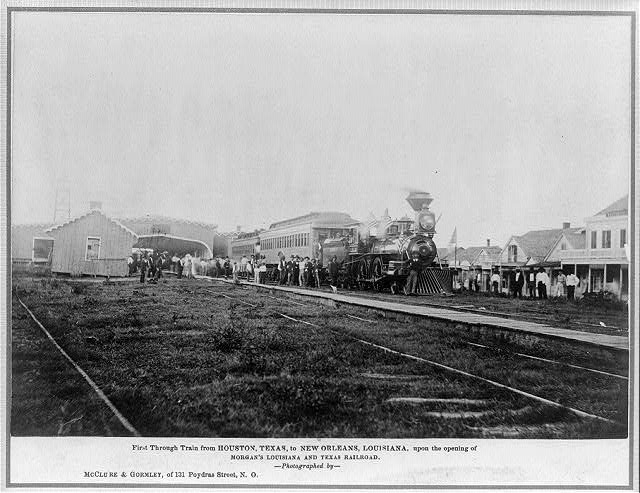 First through train from Houston, Texas, to New Orleans, Louisiana, upon the opening of Morgan’s Louisiana and Texas Railroad (1880)

In our day and age, we often don’t appreciate how easy it is to access the superior taste of wild-caught, American shrimp. From the aisles of our local grocery stores to docks populated by hometown shrimpers to ordering shrimp online and having it shipped straight to our doorsteps, U.S. shrimp are more accessible now than ever before.

However, have you ever wondered how people were able to obtain shrimp in the earliest days of shrimping? If you didn’t live in a coastal town, then you’d have to seek out your nearest shrimpers in order to get your hands on their oceanic treasures.

That was until the year 1850, when the Pontchartrain Railroad became the first railroad to transport seafood to New Orleans. The railroad was built between the Mississippi Riverfront and Lake Pontchartrain in Louisiana, allowing seafood to be sent to Shell Beach in St. Bernard Parish, Louisiana, a coastal area right outside of New Orleans and its awaiting trade markets. Unfortunately, the only towns that could take full advantage of this railway were those in relatively close vicinity to Shell Beach, as the processing and ice manufacturing industries were still in development.

Further advances occurred around 1870, when the Louisville and Nashville Railroad joined the cities of New Orleans, Louisiana and Mobile, Alabama, bringing both an even larger market for tourists and a better mode of transportation for locally harvested seafood. Plus, with the recent invention of artificial ice, broader shipment and commercialization of the seafood industry became possible.

Finally, in 1987, further developments in the realm of freezing seafood occurred when the Artesian Ice Company in Biloxi, Mississippi began producing artificial ice. The ice was delivered to the docked schooners by wagon and was used in the shipping of oysters. Eventually, it was combined with sawdust from local lumber mills to insulate iced catches of shrimp, allowing fleets to remain out on the water for extended periods of time and keep shipped shrimp colder longer.

It’s thanks to incredible advancements such as these that people all over the country today can enjoy the delicious, fresh flavor of wild-caught, American shrimp with ease! For more important developments in the history of shrimping (complete with an interactive timeline), be sure to visit our History Page!