The Future of Shrimping: What’s New in Conservation Gear?

Editor’s Note: As a part of the wild-caught shrimp industry’s ongoing efforts to support and sustain the U.S. shrimp fishery, below is an article, from North Carolina Sea Grant addressing just one of the many efforts supported by the industry to address sustainability. 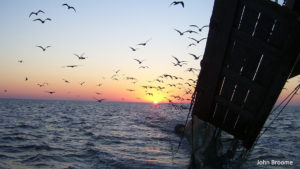 Next week, the N.C. Marine Fisheries Commission, or MFC, will discuss the
results of a three-year, collaborative research effort to develop technical solutions to reduce bycatch in North Carolina’s shrimp trawl fishery.

Generally speaking, bycatch refers to the unwanted fish and other marine creatures caught by fishermen while going after their target catch.

Most of this bycatch is discarded overboard — either because regulations don’t allow fishermen to keep the species, or because those species are undesirable to seafood consumers. Fishermen can retain a small portion of bycatch to sell if it’s legal and marketable.

A year ago, I wrote a blog post to explain the research process and the results from the first two years. In late 2014, the N.C. Division of Marine Fisheries, or DMF, had formed an industry work group to guide testing of experimental bycatch-reducing gear for shrimp trawls in North Carolina waters out to three miles in the ocean. As North Carolina Sea Grant fisheries specialists, Scott Baker and I are members of the work group.