November 3, 2022, BILOXI, Mississippi – Wild American Shrimp®, the American Shrimp Processors Association (ASPA)’s marketing program for wild-caught Gulf and South Atlantic Shrimp, has announced the winners of the 2022 Chef of the Year Awards: Chef Carl “Flavor” Stanton for “Hometown Chef,” Chefs Adam and Tommy Waller for “Influencer Chef,” and Chef Armando Vasquez for “Professional Chef.” These chefs will reign for the next year as the association’s “Admirals of Advocacy.” Each of the winners will also receive a commemorative award plate and a $500 donation to the charity of their choosing from Wild American Shrimp®. 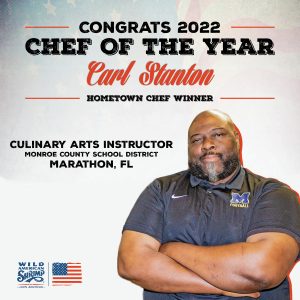 Hometown Chef of the Year Honoree

Chef Carl “Flavor” Stanton is a local chef and culinary arts instructor at Marathon Middle High School in Marathon, Florida. After a long career in the hospitality industry, working as a professional chef and caterer, he’s now spent more than a decade teaching the basics of cooking and instilling his passion for wild-caught American shrimp to the next generation of potential chefs. Chef Stanton oversees six culinary courses, educating up to 100 students per day, two of whom nominated him for this honor. The students praised Chef Stanton for his abundant knowledge of various ingredients and recipes, most importantly, touting how he leads by example. At least twice a month, he has the students show off their newly acquired skills by inviting the community to enjoy the dishes they’ve been working on at the high school’s Dolphin Bistro – a kitchen and dining area dedicated to showcasing the student’s culinary achievements. Chef Stanton will be donating his winnings to KAIR, a non-profit organization that serves individuals and families in Marathon and the Florida Keys who have found themselves in crisis. Learn more about KAIR’s mission here. 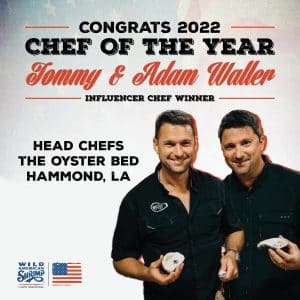 Influencer Chef of the Year Honoree

Chefs Adam and Tommy Waller of Hammond, Louisiana, grew up with a deep-seated appreciation for the culinary arts, product design and sustainable living on the Gulf Coast. Backed by a hugely successful Kickstarter campaign that raised $79,118, the Waller brothers brought this appreciation to life by founding The Oyster Bed in 2014 to share products that bring families and friends together while simultaneously providing education on the value of conserving our coastal ecosystems. Now a well-established company, The Oyster Bed is still driven by the cause and uses social media to enable professional chefs and home cooks to cultivate creative cooking using sustainable products and its innovative cookware. The Oyster Bed social channels are chock-full of educational content that showcases the brother’s exceptional culinary skills – who love to cook Wild American Shrimp®. Each week they provide fans with bite-sized yet engaging lessons on why choosing wild-caught American seafood is best for both the environment and our tastebuds, but also for the industry workers and families whose lifeblood depends on our business. The Oyster Bed takes it a step further and practices what they preach by selling uniquely designed cookware (i.e. oyster pans) on its website, where a portion of the proceeds go toward helping coastal conservation. They may have Oyster in their name, but these brothers are big-time advocates for all things seafood, including wild-caught American shrimp! The Wallers will be donating their winnings to Task Force Pelican a nonprofit organization providing full-spectrum community-based services for veterans and their families, enabling a holistic and therapeutic approach to the mental, physical, spiritual, and social rehabilitation of the patriots they serve. Learn more about Task Force Pelican here. 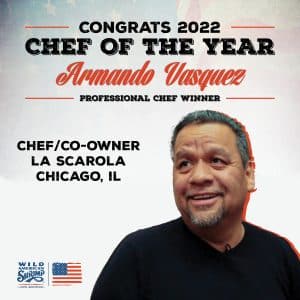 Professional Chef of the Year Honoree

Chef Armando Vasquez is the co-owner of La Scarola, an Italian restaurant in the River West neighborhood of Chicago, Illinois. Chef Vasquez immigrated to the United States from Mexico as a child without a penny to his name in search of a better life, he worked for years as a dishwasher in New York, before moving to Chicago in 1991 and meeting future La Scarola co-owner Joey Mondelli. La Scarola is more than 20 years old and is considered a staple in the culinary world of the Windy City. The restaurant stands out not only for its delicious food but also for its popularity among various celebrities, whose photos hang across its dining room walls. Ever the hit with all patrons, Chef Vasquez is known for his welcoming presence, including famously approaching diners at La Scarola, proclaiming it’s his birthday, and asking them to do shots with him, no matter what day it is. Thanks to Chef Vasquez, the menu contains a wide range of mouthwatering Wild American Shrimp® dishes, including Shrimp Armani, Penne alla Vodka, Capellini Fra Diavolo, and Pasta Lorenzo. Chef Vasquez will be donating his winnings to the Chicago Culinary Museum and Chefs Hall of Fame, which works to promote the city as a culinary mecca by cultivating an environment that fosters education, awareness, and growth of Chicago’s hospitality industry. Its goal is to preserve the past and develop the future of culinary achievements in the great City of Chicago and America. 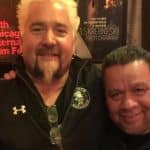 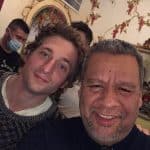 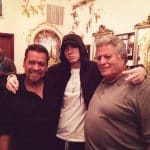 Wild American Shrimp’s “Chef of the Year” is an annual award announced each October during National Seafood Month. Nominations were received from all over the United States and were reviewed by a committee designated by ASPA/Wild American Shrimp®. Chef of the Year selection criteria includes demonstrating support for the wild-caught, U.S. domestic shrimp industry, showcasing two or more recipes utilizing Wild American Shrimp®, and involvement in community philanthropic activities, food advocacy programs, and culinary awards.

About Wild American Shrimp® and ASPA: The American Shrimp Processors Association, based in Biloxi, Mississippi, was formed in 1964 to represent and promote the interests of the domestic, U.S. wild-caught, warm water shrimp processing industry along the Gulf Coast with members from Texas, Louisiana, Mississippi, Alabama, Georgia, Florida, South Carolina, and North Carolina. We are the industry’s collective voice, and our focus is to promote the interests of shrimp processors, other segments of the U.S. domestic wild-caught shrimp industry, and the general public.