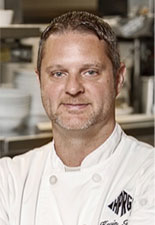 Chef Foley joined the Hyde Park Restaurant Group in 2001 as a Line Cook at The Metropolitan Grill, Columbus, Ohio and within a few short months was promoted to Kitchen Manager at Blake’s Seafood Grill in Chagrin Falls, Ohio. He left the company for a few years moving back to Columbus taking a position at Smith & Wollensky as Sous Chef and then Executive Chef.

In 2008, Chef Foley returned to the Hyde Park Restaurant Group as an Executive Chef, helping to open Jekyll’s Kitchen, Chagrin Falls, Ohio. Chef Foley now acts as a Multi Unit Chef where he oversees back of the house operations at ML Tavern, Black Point, Eleven, and Jekyll’s Kitchen. He uses his culinary expertise through menu development and the creation of weekly and monthly features.

In Chef Foley’s off time he enjoys traveling, gardening, hiking and spending time with his family.