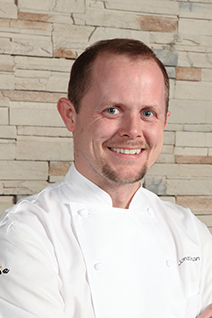 Hours may vary by location

Most of us have childhood memories about a favorite food. Jonathan Bennett carries those memories with him every day. These aren’t images of sauce-laden, vertically presented pieces of art. They are his reality. Honest-to-goodness, real food -simplicity created from transforming basic ingredients into something so simple yet so delicious that it leaves the diner in awe. This talent, working with real ingredients, isn’t something that he learned at CIA. It’s something inherent to Bennett.

His beginnings are Norman Rockwell-like. Growing up in small town Ellerbe, North Carolina, a town of one stop light and 1,600 people, is something that stays with you. That’s certainly the case here.

Bennett is the real deal. His grandfathers were chicken and tobacco farmers. His father was a hog farmer raising 2,000 pigs. His father’s best friend was a farmer who worked 400 acres. In fact, Bennett’s childhood memories are about vegetable and tobacco farming. They were as much a part of his upbringing as are memories of his grandparents’ half-acre garden, helping can vegetables and hunting “anything that moved” on his family’s property.

This year, he had six vegetable plots in his home town, Bay Village, yielding 32 different types of tomatoes, 12 varieties of peppers, six types of zucchini and six different basils. “We had 200 pounds of tomatoes this year,” he says nonchalantly.

He credits his mother with his journey into the culinary world. “She owned a salon and got me a job at a restaurant when I was 13. I made country-fried steak and chicken cordon bleu from 1983 until about 1985. At home, we had everything from pork chops to catfish.”

When high school graduation rolled around, he knew he wanted to be a chef. “Getting information then wasn’t like it is today. There was no Google. I knew about Johnson and Wales and CIA and so I applied to CIA.” He got in. His favorite class? Meat fabrication. “I love breaking down chickens and pigs.”

But CIA wasn’t all about classes for Bennett. During his third week there, at the President’s Reception, he met his soon-to-be-wife, Christine. Their first date was on his birthday. They were married shortly after graduation.

Jonathan and Christine worked together at the Homestead and moved from there to Cincinnati. Saving some money, they traveled across country. “We lived out a truck for three months. We ate meat pies in the Upper Peninsula of Michigan and Fried Bread in New Mexico.” When the journey was over, they returned to Christine’s hometown, Cleveland, Ohio.

They worked together at a bakery for a while. Bennett became the Sous Chef at Classics, a four-star restaurant located adjacent to The Cleveland Clinic. He heard of an opening at Moxie, the Restaurant through CIA’s website. In 1997, Jonathan Bennett joined the staff of Moxie. The awards followed.

Today, Jonathan serves as Vice President and Executive Chef of Red Restaurant Group, a Cleveland, Ohio-based corporation with award-winning Moxie, the Restaurant (Beachwood, Ohio) and Red, the Steakhouse (Beachwood and Cleveland, Ohio and Miami Beach, Florida) in its portfolio.