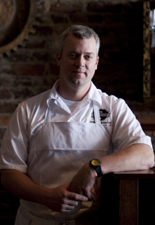 A Charleston native and College of Charleston alumnus, Bacon attended the Culinary Institute of America (CIA) in Hyde Park, N.Y. After graduating from the CIA in 1999, Bacon moved to New York City where he worked for the legendary restaurant River Café. Bacon then joined the staff at Le Bernardin, the famed restaurant of chef Eric Ripert. In 2004, Bacon was part of the opening crew of Per Se, which earned Four Stars from the New York Times and Three Michelin Stars.

After 10 years in Northeast, Bacon returned to the Lowcountry first as executive chef of Carolina’s restaurant. He incorporated a local-first philosophy into his culinary practices by building strong relationships with local farmers and fisheries. When he joined The Indigo Road Restaurant Group, Bacon brought these relationships with him to Oak Steakhouse, and added his personal touch to the menu, taking it in a progressive, yet local direction. He continues to bring that same creativity to the kitchen of The Macintosh, with the goal of new-American cooking rooted in the tradition of Lowcountry favorites.