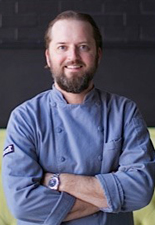 Erik Niel was raised in Mandeville, Louisiana, a community on the north side of Lake Pontchartrain and an hour away from the Gulf. He describes it as a place where people care deeply about food, and everyone has that special dish they’re known for throughout the community. “In Southern Louisiana, food is a soulful thing. I still remember who made the best gumbos, and who made the best roasts.” Niel spent many an afternoon fishing with his dad and brother in the fresh water near Mandeville, driving west to Calcasieu Lake (where his dad was raised) to fish in salt water, and duck hunting in Cameron Parish. Using techniques passed down from his parents and grandparents and experimenting on his own, Niel learned to cook from his catch – gumbos, stews, étouffée, and pot roasts – and how to serve them in various ways. This instilled in him an appreciation for where food comes from and the process of preparing it from beginning to end, something that influences his cooking to this day.

Niel attended The University of Texas at Austin as a Psychology major and Business minor. He liked the calculated nature of business and knew he wanted to own his own one day. However, his love and appreciation for food and restaurants persisted, and even in college when he entertained for friends or cooked for parties, food was never far from his mind. After summers of working in restaurants and getting the feel for the industry, Niel decided that food was his muse. He enrolled in culinary school at Johnson & Wales in Vail, Colorado, and applied to work at Sweet Basil, a restaurant notoriously resistant to hiring students. He landed the job, and credits the experience with cultivating his appreciation for a formal kitchen and respect for ingredients.

While Niel was in culinary school, his family transitioned to Chattanooga from Louisiana. His brother tragically broke his back during his junior year football season, and they weren’t sure he would lead a normal life again. It was a turning point for Niel, as he realized he’d never seen his brother play football, and when his brother healed enough to play as a senior Niel packed his bags for Chattanooga. He landed a job as a Floor Manager at the now-closed Southside Grill, with the promise that he could have Friday nights off to see his brother’s football games. Niel didn’t miss a single game that fall. Thinking he would leave at the end of football season, Erik met his future-wife Amanda (a hostess at Southside Grill) and started realizing the potential of owning a business in Chattanooga. After two years as sous chef at Chattanooga mainstay, St. John’s, Niel began writing his business plan.

In May of 2005, the couple opened Easy Bistro & Bar in downtown Chattanooga, named after his laidback nature and uncanny ability to make the hard work of a restaurant look easy. Here, Niel draws inspiration from both traditional approaches and new techniques. He enhances elements of classic French and Southern cuisines with fresh combinations and ideas, while maintaining the most important principle that “taste can never be sacrificed for presentation or a wow-factor – it must simply taste good, always.” While his style of cooking is a direct product of growing up in Louisiana, he tends to stay away from the rich sauces and rouxes of traditional Creole cuisine. He describes his food as minimalist, letting the ingredients stand for themselves with little manipulation. In 2016, Niel was voted “Chef of the Year” by the Tennessee Tourism & Hospitality Association, and he’s been named a James Beard Award semifinalist for Best Chef: Southeast for two years in a row (2016-2017).

Niel also spearheads the wine program at Easy Bistro & Bar, pushing himself to find unique expressions and stories through wine and food pairings. He feels strongly that wine and other beverages are an integral and often overlooked part of the meal and experience, a passion inherited from his father, a connoisseur and avid wine collector. The restaurant currently offers a wine list with 250 global wines focusing on France and California.
In October 2014, Niel and his wife Amanda assumed operations of Main Street Meats, a neighborhood butcher shop that works closely with Chattanooga’s surrounding farmland. As Chef/Operator, Niel uses craft butcher techniques to offer quality products and a strong charcuterie program, all exploring the distinctive flavors of the region.

When he has a moment outside the kitchen, he can usually be found playing with his son, Cade. They enjoy playing in the park, fishing in Louisiana with Erik’s Dad “PawPaw”, and walking in the woods.