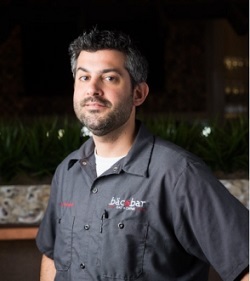 Carl Schaubhut assumed the position of executive chef for Café Adelaide in March 2013 after serving as a key member of the Commander’s Palace culinary team for two years. Commander’s Palace Executive Chef Tory McPhail says Schaubhut takes his duties in the kitchen very seriously. “We call him ‘Uncle Carl’ because he is always the responsible one,” McPhail said with a laugh.

“Our motto here is work hard, play hard,” said Schaubhut. “We take our food, drinks, and service very seriously, and have fun the rest of the way. That’s what we’re all about here – that’s what New Orleans is all about!”

Schaubhut was a Louisiana local through and through; his parents’ families hail from Des Allemands, Ponchatoula, and Independence. He attended Jesuit High School in New Orleans and Louisiana State University in Baton Rouge. Schaubhut, who had always enjoyed being in the kitchen, was on the path to attend LSU Law School when he had a career-changing conversation in the Commander’s Palace courtyard with Director of Operations Steve Woodruff. “Steve told me to jump in head first, start at the bottom and learn everything I could about restaurants,” he said. “I had to decide if I wanted to cook or if I wanted the life of so many of my Jesuit classmates as a lawyer. After talking to Steve, I realized I wanted to cook.”

Schaubhut went on to help open the restaurant Fire on Annunciation Street with Brenda Darr, before relocating with the restaurant to Santa Rosa Beach in Florida after Hurricane Katrina. After serving as Fire’s executive chef for four years, the chef decided to move his wife and young family back to his hometown to once again work with the restaurant group that provided the initial inspiration to follow his passion.

Schaubhut was vested in the New Orleans community, participating in local festivities and organizations including the Corner Club, an Irish marching club; Hogs for the Cause, which aids families battling pediatric brain cancer; and various other local fundraisers. In the 2013 New Orleans Food and Wine Experience, he took home the Gold Medal in the “Soups and Stews” category for his Piquillo Pepper Bloody Mary Gazpacho. “No matter the occasion, he gives 100 percent effort,” Ti Martin Adelaide, Proprietor said. “We look forward to seeing him in action at Café Adelaide.”

Chef Carl took a leave of absence from Cafe Adelaide in 2014 to focus on his battle with cancer. You can read his blog about his journey on Carls Quarter’s website: Kicking Cancer in the Gut.

Carl passed away on the evening of Monday, September 9, 2019 due to cancer. He was 37-years-old, a husband, and a father to two children, ages nine and six. Our thoughts and prayers are with the family and friends of Carl, whose memory we honor and cherish.