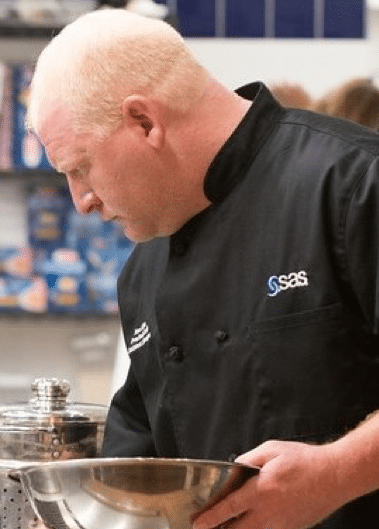 Ron Allen is a chef and Senior Culinary Manager at SAS Institute in Cary, NC. SAS, one of the pioneers in analytics software, has on-campus cafes for its employees providing company subsidized breakfast and lunch for thousands of people each day. Since being hired as an assistant manager of one of the cafes there, Ron has strived to bring high-quality, innovative food to his customers. It was this effort that helped elevate him to Senior Culinary Manager where he leads the culinary endeavors of the cafes.

Ron is a native North Carolinian which, nowadays, seems hard to come by.  Growing up in Rocky Mount, a city of about 50,000, half-way between New York and Miami on I-95, he remembers trips just a few hours east to the beach with family and friends when they would stop by one of the road-side shrimp stands to buy a few pounds to bring back to the vacation house for dinner. He quickly realized just how good those shrimp really were when he later worked in places that would buy IQF farm-raised shrimp for the sake of convenience.

When Ron was 11, his father owned and operated a small seafood restaurant in Tarboro, NC. During a few summers, Ron worked alongside his father, making cocktail sauce, washing potatoes for baking, shucking oysters and, peeling and deveining pounds and pounds of Wild American Shrimp. Those tiny creatures played a big role in his life as he turned that summer job into a career.

After high school, Ron attended NC State University where he worked for the self-run dining and catering department there. It was there he met his first mentor, Chef Bill Brizzolara, and things took off from there. After a year of pre-veterinary medicine curriculum, Ron left NC State to work under Bill.  Not long after that, Ron graduated with honors from Wake Technical Community College’s culinary arts program, where he received the American Institute of Wine and Food Scholarship. Along with NC State Dining, he has worked in restaurants and catering companies including the NC Museum of Art’s Restaurant under Chef Andy Hicks and his wife, and restaurant Pastry Chef, Jennifer, Chef Amy Tornquist’s Sage and Swift Catering in Durham, and Chef William D’Auvray’s Fins in Raleigh. He has been with SAS since 2010.