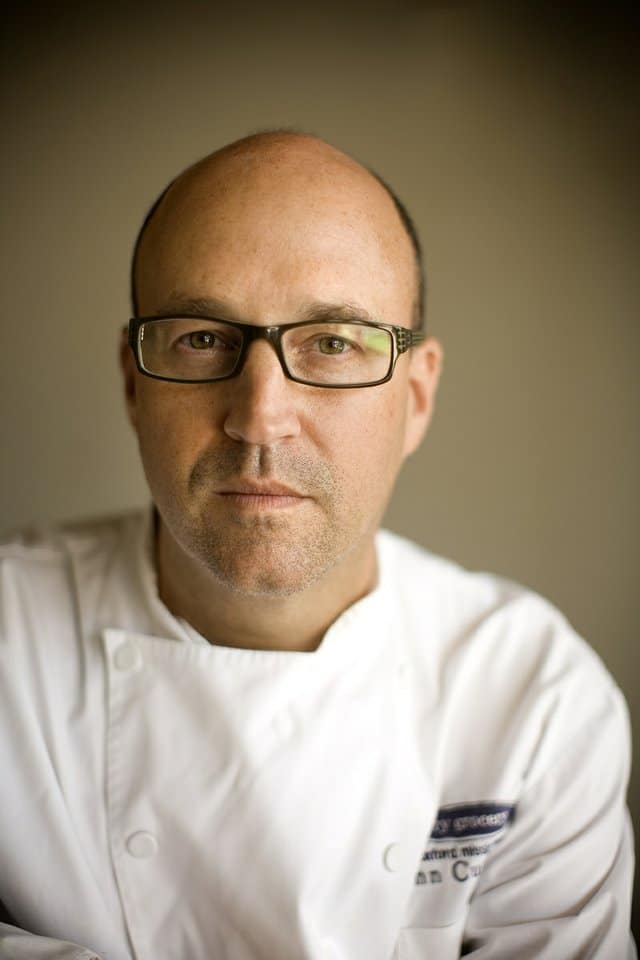 Chef John Currence was born and raised in New Orleans, LA to a family that loved to cook and spend time in the kitchen. His mother’s travels with his father during his childhood, combined with the family’s several years in Europe, brought the dishes of the world to their dinner table, while time spent hunting and fishing in South Louisiana began the education in the foods of his home.

Currence’s first cooking job was while working offshore as a deckhand on a tugboat in the Gulf of Mexico, though he saw his first restaurant job while in school at UNC where he started washing dishes at Bill Neal’s Crook’s Corner. An immediate fascination with the business prompted several supplemental jobs (baking bread at an Italian restaurant, butcher shop at a local grocery store, cutting salmon and bluefish at a local smokehouse, etc). He worked his way up through Crook’s kitchen and after three years, Currence returned to New Orleans at the behest of a high school friend, Larkin Selman, to open Gautreau’s, where he worked as Selman’s sous chef. After several years, Currence moved on to the Brennan family of restaurants to help open Bacco before finally settling in Oxford in 1992 and opening City Grocery.

Currence was the recipient of both Restaurateur of the Year and Chef of the Year awards from the Mississippi Restaurant Association in 1998. In 2006, he received the Southern Foodways Alliance Guardian of Tradition Award and won the 2008 Great American Seafood Cookoff in New Orleans. In 2009, he was awarded the James Beard Foundation award for Best Chef South and was a winner of Charleston Food and Wine Festival’s Iron Chef Challenge.

He is a contributing editor for Garden and Gun magazine and an avid outdoorsman who enjoys bird hunting of all varieties, fishing, and golf. John is active in the community, having served as chairman and president of the Mississippi Restaurant Association and president of the Yoknapatapha Arts Council. He is active with St. Jude Children’s Hospital, Memphis Ballet, Lafayette County Animal Shelter and is a sitting member of the SFA Board of Directors, for which he has served as culinary director from its inception in 1996.

He currently lives in Oxford, Mississippi, with his wife, Bess.