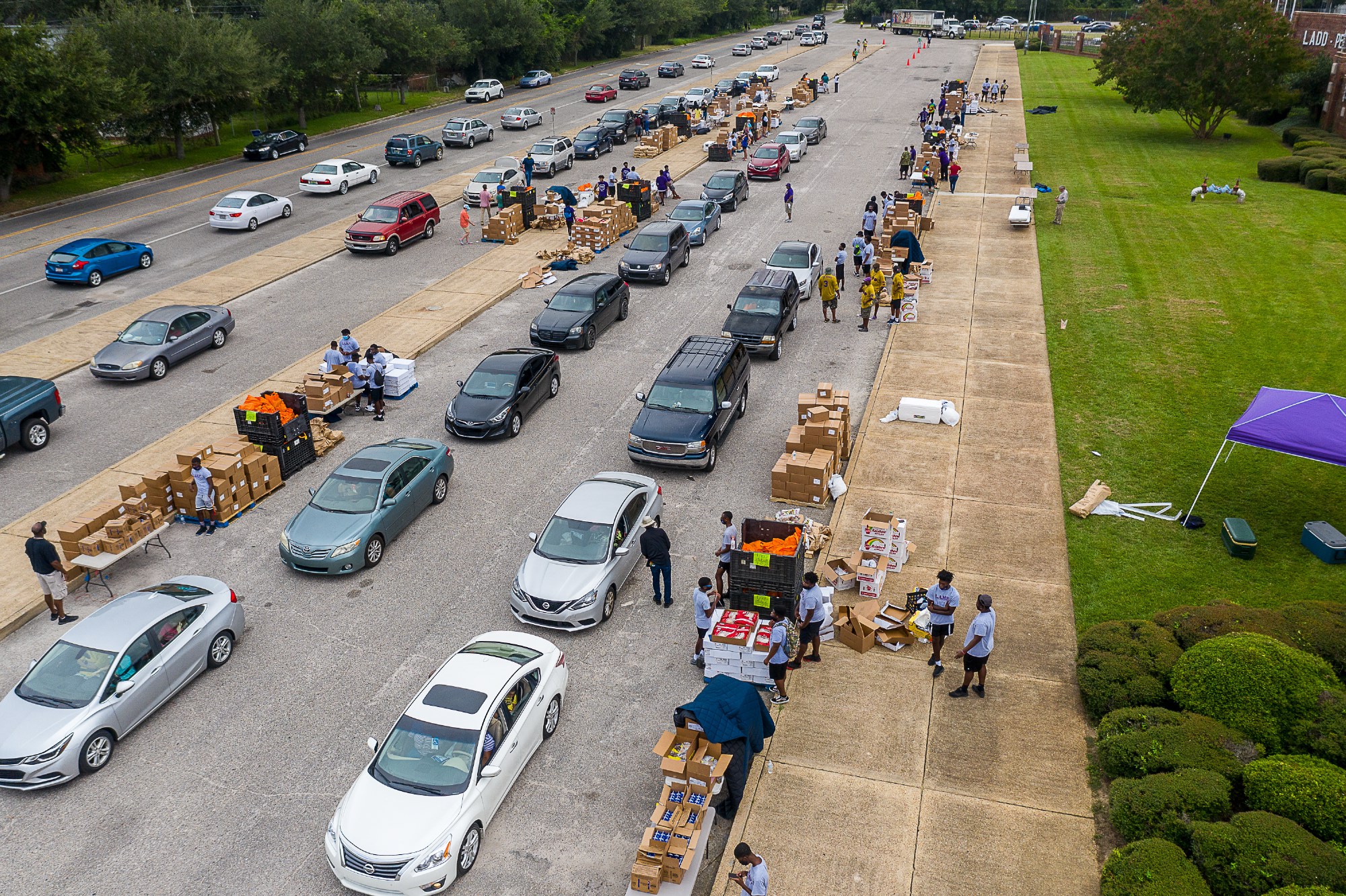 A drive-thru food donation organized by Feeding the Gulf Coast.

In 2020, the U.S. Department of Agriculture (USDA) purchased $25.14 million of wild-caught domestic shrimp processed by small businesses and members of the American Shrimp Processors Association (ASPA).

When USDA invited bids for its first-ever shrimp commodity purchase, the domestic shrimp industry heeded the call. ASPA members sold, packaged, and distributed 6.37 million pounds of wild-caught domestic shrimp harvested in the Gulf of Mexico and South Atlantic.  This highly nutritious protein went to food banks in 49 states and territories, including Washington, D.C. and Guam, to feed those in the greatest need at the height of the pandemic.

This first round of wild-caught shrimp purchases was a resounding success in both helping hungry families and supporting small businesses along the Gulf and South Atlantic coasts.  It was such a success that the USDA recently announced a second round of purchases to come later in 2021.

“The USDA is pleased to make the largest single seafood purchase in the Department’s history. These healthy, nutritious food purchases will benefit food banks and non-profits helping those struggling with food hardship,” said Agriculture Secretary Tom Vilsack, in a statement to IntraFish.

“On behalf of the American Shrimp Processors Association, with members along the U.S. coastline from Texas to North Carolina, all dedicated to sustainably harvesting and processing wild-caught American shrimp, we applaud the USDA for announcing another round of domestic shrimp purchases,” said Dr. C. David Veal, Executive Director of ASPA.

*Note: This map does not depict plotted pins for Guam due to space constraints: ASPA member-processed shrimp purchased by USDA in 2020 was distributed to 47 states, Washington, D.C. and Guam.

The number of Americans using food banks and drive-through food pantries rose sharply during the COVID-19 pandemic. According to the latest projections from Feeding America, the nation’s largest domestic hunger-relief network, more than 42 million people (one in eight), including 13 million children (one in six), may experience food insecurity in 2021. Many people who have been most impacted by the pandemic were already food insecure or at risk of food insecurity before the COVID-19 outbreak and are now facing even greater hardship. In northeast Georgia alone, for example, more than one in seven people depend on food banks and charity food programs to feed themselves and their families on a regular basis according to an article from Now Habersham News.

“We’ve never experienced food insecurity at this level since we’ve been tracking the data for the last 20 years,” said Diane Whitemore Schanzenbach, Director of the Institute for Policy Research at Northwestern University, in a story for KERA News.

The USDA’s Dietary Guidelines recommend that every American, including pregnant women and children, should eat two servings of seafood each week. Based on the meal and serving size standards in the Dietary Guidelines, each family of four that receives a 2-pound shrimp individually quick frozen (IQF) package from their local food bank can meet the USDA’s recommended two servings.

Of the 217,200 cases of shrimp purchased by USDA in 2020, a full 99% were for 2-pound IQF bags in three sizes (21-35, 31-50, and 51-70 shrimp/pound), and 93% were P&D while 7% were shell-on tail.  The other 1% of shrimp purchases were 5-pound blocks, but because they are distributed among the networks of food banks across America, both the food bank facilities and the ultimate consumer-preferred smaller sized P&D 2-pound IQF bags—the perfect family size shrimp package.

ASPA members process the highest quality shrimp on the market and appreciate the Federal government’s equally high standards. “The military will only buy 100% Grade A, and as a result of meeting these very high standards, our shrimp go all over the world to the U.S. military,” says Greg Ladnier, owner and president of Sea Pearl Seafood Co. in Bayou La Batre, Alabama. “Our commercial customers have come to realize and appreciate the quality shrimp that result from these stringent quality guidelines. They also know that they are going to get exactly what we tell them they are getting. We wouldn’t have it any other way.” Sea Pearl alone shipped out over 90,000 pounds of shrimp.

USDA shrimp recipients can be found all over the country, including the Atlanta Community Food Bank (ACFB), Georgia’s largest food bank servicing more than 700 recipient food pantries in 26 counties, which only had positive things to say about the wild-caught American shrimp.

“Shrimp was an amazing addition to our TEFAP (The Emergency Food Assistance Program) offering,” said Michele Grear, Supply Director at the ACFB. “The wild-caught domestic shrimp were fantastic! They moved immediately, so we know our clients loved it. We’ll gladly take more shrimp, as much as you can give us!”

With news of the next round of purchases in mind, it is worth noting that the wild-caught U.S. shrimp industry exhibits the inherent ability to pack frozen foods ready-made for easy distribution among U.S. food bank networks. The most common pack is the IQF package containing one or two pounds of frozen shrimp. As shown by the speed at which the ACFB distributed its 60,000 pounds of 2-pound IQF packs to its agencies, the 2-pound bag of IQF shrimp is the most popular, and it fits squarely within the USDA’s Dietary Guidelines by typically feeding a family of four two meals.

ASPA and food banks throughout the country hope the USDA continues these important purchases well into the future.

To purchase delicious wild-caught American shrimp for yourself or your business, visit our Where to Buy page!