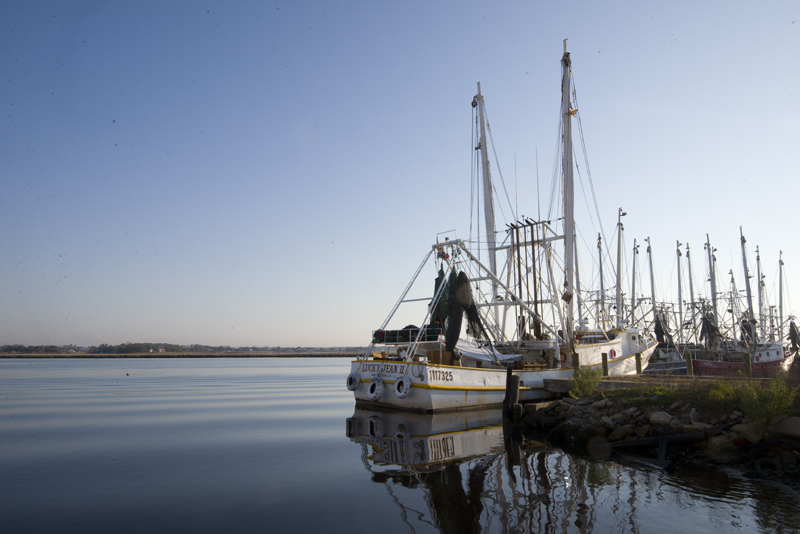 When Rudy Lesso Jr. walks into his office, he is greeted with a perfect panoramic view of Biloxi Back Bay. On a clear blue sky kind of morning when the wind is still, the surface of the water is like glass and beautifully captures a pristine reflection of shrimp boats lined around his docks that have been home to independent fishermen since 1978.

As he sits behind his large mahogany desk and takes in the picturesque scene that has bountifully provided for his family for 36 years, the owner and president of R.A. Lesso Seafood can’t help but pause every now and then for a moment of thanks. Rudy credits his love for the seafood industry to a strong heritage of fishermen who tirelessly navigated coastal waters for shrimp since the early 1900s.

His grandfather, Sam Lesso, Sr., emigrated to New Orleans from Croatia in 1905, and he and a couple of other Croatians jumped ship and headed toward Biloxi when they learned a large Croatian community was established in the city well-known for its thriving seafood industry. At that time, Biloxi was quickly moving toward the status as the “Seafood Capital of the World,” and even though the Lesso patriarch didn’t know any English, he immediately found work on shrimp boats to make a living.

He also eventually learned some English. Rudy knew his grandfather well and remembers conversations with the gentle giant: “He could understand everything we were saying, and he could speak English, but he would just rather speak in Croatian,” he says. “Back then, when he came over to the Coast, and up until his death, a lot of people in east Biloxi that were from Croatia still spoke the language.”

Rudy, now 67, has fond memories of growing up in a close-knit Croatian community full of people known for their dedicated work ethic. Within Biloxi’s melting pot of different cultures, they served as a vital asset to the development of the seafood industry on the Gulf Coast. In most cases, entire families worked to secure income, and in the Lesso family, while the patriarch was shrimping, his wife worked in a factory, and all six of their children were involved in the industry.

“Back in those days, a lot of people on the east end of Biloxi didn’t have the opportunity to finish school, and they had to go work to supply their family with money and to make ends meet,” Rudy says. “That’s when all three sons and all three daughters went to work. The women worked in factories and the men worked on boats and bought their own boats.”

Rudy’s father, Rudy Lesso Sr., was the captain of his own boat, and there was no greater joy for him than to be on the water pulling in net after net teeming with wild-caught gulf shrimp. However, when shrimping hit a slump around the mid-1950s, providing for his family was the priority, and Rudy Sr., his two brothers and a slew of other fishermen who also were boat owners, started working for the oil industry as captains of oil boats that traveled around the world.

After 10 years of only being able to see his family once a year due to the demanding schedule of the oil business, Rudy Sr. jumped at the opportunity to come home when he learned the shrimp industry was starting to shift in a promising direction again.

“Seeing my dad once a year was tough on the whole family, and it wasn’t worth the time and effort for him to be over there the rest of his life,” Rudy says. “He was really happy to get back on the boat here and get back to his first love of being on the water as a fisherman.”

Although shrimp was the lifeline of past generations, when Rudy graduated from college, he worked for Chevron as a sales rep in Miami for four years managing 25 to 30 full-service gas stations. He enjoyed his job, but after a while, he knew the Gulf Coast was calling his name: “The culture, the friends…I missed all of that,” he says. “I would say to myself, ‘I’ve got to find something to get me close back to Biloxi.’”

With a stroke of luck, Rudy stumbled across a Merrill Lynch ad in the Miami newspaper looking for stockbrokers, and within a short time, he was hired, relocated to Mobile, Ala., and worked for the company for five years until it was time to heed another call — the shrimp industry.

When Rudy opened the business, the landscape of the Gulf Coast was bustling with 33 additional processing plants, and today, only a handful of processors are in operation. For almost four decades, Lesso Seafood has stood the test of time, but not without enduring its share of trials. Hurricane Katrina was a tough blow when it left $8 million in damages to the plant and stole $3.5 million worth of product, but by far, the hardest hit was the recent passing of Rudy’s son, Rudy Lesso III, who worked with his father and managed the value-added operation.

When it comes to this type of business, there is an unparalleled resiliency fostered through tribulation, whether natural disaster or personal grief, that will test the limits of courage to keep pressing forward in an industry that cannot afford to rest during seasonal months. Rudy says losing his son last August was difficult for everybody at the company, and he is indebted to his loyal team who kept the plant running despite the hard time.

He and his nephew, Jesse, are running the value-added aspect of the business with “no desire yet to quit.” Their specialty is Peeled and Headless block frozen shrimp as well as IQF Peeled, Headless shrimp, and Cooked shrimp. They currently sell to food distributors, casinos, and other processors around the country.

He feels blessed that his son was able to work with him for so many years and experience the joy of being in the shrimp industry, which is the foundation of the Lesso lineage: “The biggest part of this business is loving what you do,” Rudy says. “How many people after 36 years can say, ‘I love what I do and I don’t want to retire.’” And with a hearty laugh, he adds, “They’ll have to take me out of here with my boots in the air!”