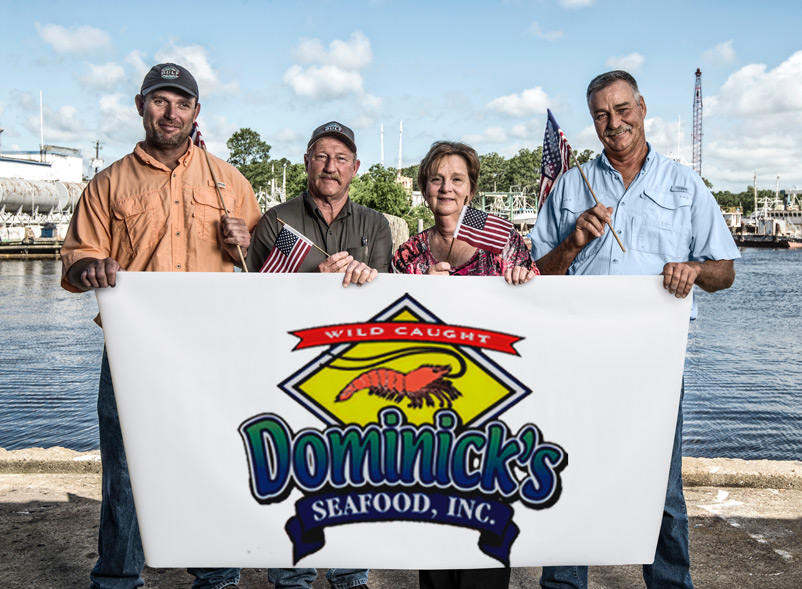 Dominick’s Seafood, founded in 1992 by Dominick Ficarino, is just the latest venture in four generations of shrimp and seafood processing in the Ficarino family. With a fleet of seven boats named after family members like Dominick’s mother (Miss Barbara), his wife (Miss Loraine), his two daughters (Miss Ashleigh and Miss Hannah) and more, the family ties at the plant are plentiful. Not to mention that Dominick, his sister Debbie, their first cousin Rocky Bosarge and Dominick’s brother-in-law Jerry Glass all work side by side supporting the thriving operation right off Shell Belt Road in Bayou La Batre, Alabama.

Pictures of Dominick’s great-grandfather’s schooner Amethyst can be found all around Mobile County, and his grandfather L. W. (Willie) Graham, Sr. was also a pioneer in seafood processing. He owned and operated the first three peeling machines ever to be used in the industry.

Dominick’s father, Mr. Fic, carried on the family tradition by starting his own business, Quality Foods, which dominated the industry for over 25 years. He packed shrimp primarily for the U.S. military and was an excellent salesman. In fact, he was widely known for “selling shrimp while they were still in the Gulf.”

As Dominick, Debbie and Rocky spent many days at the plant growing up, little did they know it was also their destiny to carry on the family’s shrimp industry heritage.

“I was interested in it from Day 1,” Dominick says. “I would be up there twisting a little knob on a machine trying to make it do better. I just always loved it.”

Quality Foods was damaged by Hurricane Frederic in 1979, but it remained in operation and was eventually sold in 1981. After that, Dominick took his father’s advice, along with his experience, and started his own shrimp business, Dominick’s Seafood, in 1992 — breathing new life into the family legacy.

Today, through a combination of hard work, intelligence, listening to customers and looking ahead, Dominicks’ business has thrived. Even after his company endured Hurricane Katrina in 2005, neighboring processor Sea Pearl Inc. down the road provided a facility for all of Dominick’s employees to work until he found a building just up the road from the vulnerable Point, where the previous building had been.

Today, Dominick’s Seafood, which has a 20,000 square foot processing facility with 600 feet of dock right on the bayou, is a “totally integrated company.” Complete with its own fleet of shrimp boats, the company also co-owns an ice plant and a fuel dock just down the road. In fact, Dominick’s is the only shrimp processor in the Gulf with its own fleet of boats, and he is confident this gives him one of his biggest advantages. He can completely control the operation, and the quality of the shrimp, from the time they come out of the water until they reach the customer. Although he credits this fully integrated approach with much of the company’s success, ”we wouldn’t be able to do this without a great product from the Gulf and great people.”