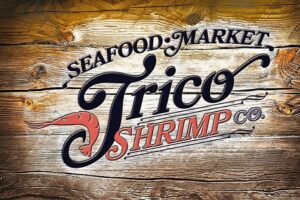 “I’ve been involved in the shrimping industry in some way pretty much my whole life.”

So begins the story of Dennis Henderson, founder and co-owner of Trico Shrimp Company in Fort Myers, Florida.

Born 20 miles south of Pittsburg, Pennsylvania, Dennis Henderson moved down south with his family in 1961 when he was in the third grade.

“I’ve always been a worker, I always want to be working,” Dennis says, “so I started working, went to a couple of different schools, and I met my current business partner, George, down here in the fifth grade!”

While his father, a welder, worked on boats around the docks, Dennis would tag along and wash parts. His mother was a waitress and his older brother by 18 months was a dishwasher at the same restaurant. Dennis himself, hungry for work, would later work there as well at only 13-years-old.

“I had a full-time job washing dishes, being a bus boy, a maître d’, I was a fry cook – I did everything!” From there, Dennis continued to find work at different careers as he got older, working at a cabinet shop, carpentry, packaging, opening a welding shop (of which he still owns two), and eventually shrimping.

“George and I bought a boat off of some people I worked for when I was about 18-years-old. It had taken me probably six years before we had bought that first boat, but I had done every other job related in this business before then – unloading boats, stacking trucks, you name it – all while working in this same area where my dad had worked, where I had worked, and where I still work to this day.”

From there, Dennis and George would proceed to purchase more boats from auctions before starting their first official operation at a fish house in Tampa. Working there for a few years with six boats led to another company conveying interest in their production, so they sold that company and returned to Fort Myers where they proceeded to purchase the assets from another fishing company – Saint George – who Dennis had previously worked for in 1973. With more boats and experience than ever, along with a new financial advisor (or “the money man” as Dennis describes it) by the name of Bob, Dennis and George’s operation had become one of the largest shrimping companies in the area in terms of fleet size, and it remains so to this day.

However, the company still needed a name. Dennis, as straightforward as ever, recalls, “We were three guys, and we were a company, so we just came up with the name ‘Trico.’” The name stuck and the rest is history.

One of the largest shrimping and seafood companies in the area, Trico has been providing shrimp, crab, scallops, and more to both the locals and tourists of Fort Myers for over 40 years. They are considered a staple of the community for providing seafood through their own in-house market, Henderson’s own Skip One 41 Seafood Restaurant and Market, and supplying fresh catch to numerous other restaurants in the surrounding area.

Trico showcases their catch with pride. In both of their markets at Trico’s main office and at Skip One 41 respectively, customers are treated to a highly transparent, “no filter” approach, with most seafood laid out fresh and unpackaged for customers to choose for themselves. At Trico, customers are even encouraged to step into the loading bay and watch as shrimpers haul their catches inside to be transferred to either cold storage or shipped elsewhere.

“Everything we catch and put out is chemical free – the only reason we can’t technically put that on the box is because there’s salt in the water, but that’s it!” Both traceability and sustainability are key for Henderson and all of Trico.

“We just want people to know where people are getting their seafood from, and that’s just from local waters,” he said.

Trico manages to do it all from their humble base of operations right along the Matanzas Pass next to the iconic Matanzas Pass Bridge that connects the beaches of Estero Island, a popular tourist destination, to the mainland of Fort Myers. The history of this location is a fascinating one that goes all the way back to World War II, where a facility up-river in Buckingham would build tents and parachutes and then send them down the river to be stored in Fort Myers in the very same set of buildings that would later become the headquarters for Trico Shrimp Co. The buildings themselves are even made of heart pine, designed to be incredibly resilient to potential damage. Later in the 1950s and 1960s, the area housed an ice company. It was around this time that a young Dennis first set foot on the property.

“In the 50s and 60s, everything was ice. When I was in the sixth grade, I would go there to play while my dad worked, they’d have 300-pound blocks of ice that they’d put through a grinder to be spit out on the boats for their catch. I always wanted to ride down one of those blocks of ice, good thing somebody would grab me!” Dennis recounts with a laugh.

Today, Trico owns 12 boats while frequently working with outside boats from whom they will purchase and sell their shrimp. Trico’s boats are frequently named after Dennis and members of his family – Big Pappa, Big Daddy, Kayla Nichole, Miss Maddie – and in terms of shrimp, they all primarily harvest that one illustrious treasure that the local waters are known for, pink shrimp. Known for their noticeably sweet taste that can be eaten completely raw (Dennis peeled some for us himself), pink shrimp – known as “pink gold” to locals – has been the staple of the Fort Myers shrimping industry since its discovery there in 1949. PBS even filmed a documentary on the subject (WATCHABLE HERE) in 2014 with Dennis as one of the featured interviewees.

Through it all, Dennis Henderson and the rest of Trico Shrimping Co. have maintained the same straightforward approach to business, tackling any of life’s hardships with a sense of humor and commitment to overcome them and, above all else, providing all-natural shrimp straight from the waters of Fort Myers to its people.