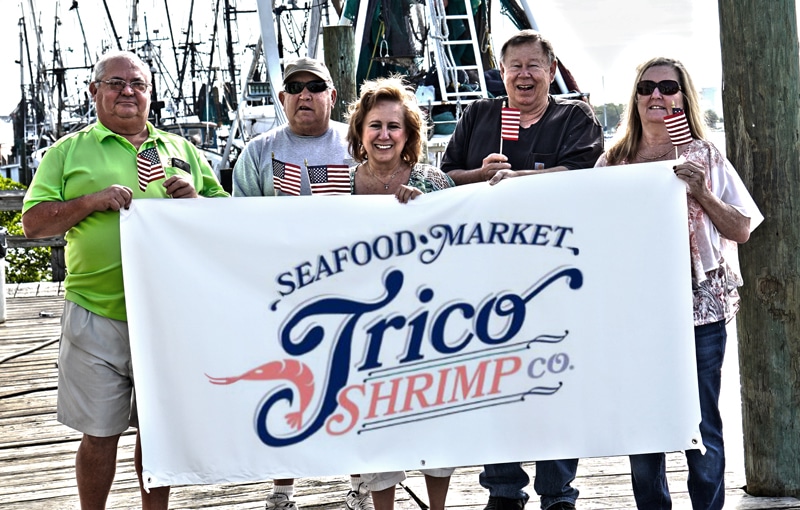 “I’ve been involved in the shrimping industry in some way pretty much my whole life.”

So begins the story of Dennis Henderson, founder and co-owner of Trico Shrimp Company in Fort Myers, Florida.

Born 20 miles south of Pittsburg, Pennsylvania, Dennis Henderson moved down south with his family in 1961 when he was in the third grade.

“I’ve always been a worker, I always want to be working,” Dennis says, “so I started working, went to a couple of different schools, and I met my current business partner, George, down here in the fifth grade!”

While his father, a welder, worked on boats around the docks, Dennis would tag along and wash parts. His mother was a waitress and his older brother by 18 months was a dishwasher at the same restaurant. Dennis himself, hungry for work, would later work there as well at only 13-years-old.

“I had a full-time job washing dishes, being a busboy, a maître d’, I was a fry cook – I did everything!” From there, Dennis continued to find work at different careers as he got older, working at a cabinet shop, carpentry, packaging, opening a welding shop (of which he still owns two), and eventually shrimping.

“George and I bought a boat off of some people I worked for when I was about 18-years-old. It had taken me probably six years before we had bought that first boat, but I had done every other job-related in this business before then – unloading boats, stacking trucks, you name it – all while working in this same area where my dad had worked, where I had worked, and where I still work to this day.”

From there, Dennis and George would proceed to purchase more boats from auctions before starting their first official operation at a fish house in Tampa. Working there for a few years with six boats led to another company conveying interest in their production, so they sold that company and returned to Fort Myers where they proceeded to purchase the assets from another fishing company – Saint George – who Dennis had previously worked for in 1973. With more boats and experience than ever, along with a new financial advisor (or “the money man” as Dennis describes it) by the name of Bob, Dennis and George’s operation had become one of the largest shrimping companies in the area in terms of fleet size, and it remains so to this day.

However, the company still needed a name. Dennis, as straightforward as ever, recalls, “We were three guys, and we were a company, so we just came up with the name ‘Trico.’” The name stuck and the rest is history.

Want to learn more about Trico Shrimp Company? Be sure to visit their Member Page and website for more information!